The Gayletts – Son Of A Preacher Man 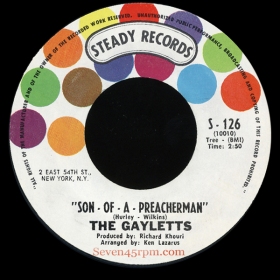 The Gayletts formed in 1967 in Jamaica consisting of Merle Clemonson, Beryl Lawson and the legendary Judy Mowatt, but sadly broke up in 1970 when Lawson and Clemonson left for America. While it’s difficult to tell you much more about this lovely short lived reggae soul formation, they did leave us a handful of 7″s including this smashing Dusty tune, Son of a Preacher Man, the adorable Silent River Runs Deep, and another great cover, Brenda Lee’s Here Comes That Feeling.

Judy Mowatt of course did go on to become quite the prominent reggae queen there after. In the earlier 70’s she wrote tracks for Wailers’ front man Bunny Livingston, but got her big break in ’74 when she joined up with Bob Marley & The Wailers’ backing vocal trio the I Threes, along with Rita Marley and Marcia Griffiths. Mowatt continued to record for decades after, including a spree of gospel albums between 1998-02.

Preacher was arranged by Ken Lazurus, who once sang for Byron Lee And The Dragonaires, and was released on Steady Records and also on Hourglass the same year . The flip That’s How Strong My Love Is, is a very loving slow ballad with 2.37 mins. of the sweetest harmonies.

The Gayletts is that perfect explosion you get when you mix up a nice dash of doo wop, a big clump of rock steady and a generous sprinkle of heart and soul, and then stirred with the most beautiful rhythm. I find this track so uplifting and a hard one to beat when it comes to female soul groups!