United Artists 50328  US Year 1968 The Kane Triplets were a three piece vocal sensation made up of the sweet identical triplets Lucille, Jeanne and Maureen Kane, and started their professional show business career very early in life. As children, they were discovered by the McGuire Sisters after performing on the Arthur Godfrey Talent Scout Show, and were asked to join with them in their act on the road and on several television shows. As you can imagine, these little ladies must have been so overly cute and wholesome, but from the footage that you can track down on the net, you cannot deny them of their harmony abilities!Reaction to the girls was amazing! The triplets established their own act and with their growing success, worked in very renowned venues throughout the country, and making Vegas their second home. They even got to work with huge celebrities like Tony Bennett, Andy Williams, Sergio Mendes, Smokey Robinson and the Temptations

The ladies released a few 45’s but it was in 1968 when this little monster was unleashed to the world! Easily their most stin 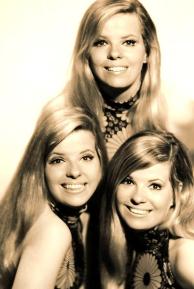 ging and thrilling recording, which really does give justice to Lalo Schifrin’s original 66′ master piece. While writing credits go to Fred Milano and Angelo D’Aleo of The Belmonts, I can’t tell you if this was in fact the first vocal release, but it’s by far the best I’ve heard. The fact that these now adorably blossomed but still innocent looking ladies are behind this big composition and production makes it even more tastier!

The Kane Triplets were in show business for more than 20 years and made dozens of television appearances, but sadly another sad ending to this story learning that Jeanne Kane was found murdered at a Staten Island (New York City) commuter rail station parking lot, murdered by her ex-husband and retired sergeant John Galtieri in 2007. But on a nicer note, this song always get a great reaction on the dance floor when played and will keep these three little sisters shining on together for many more years.