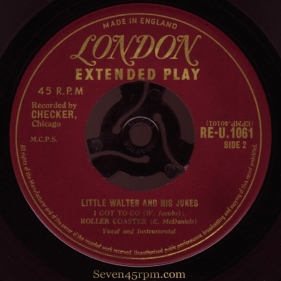 Track 2 – I Got To Go written by Marion Walter Jacobs

Marion Walter Jacobs was born in Marksville, Louisiana, on  May 1, 1930 and picked up the Harmonica at a very early age.

By the age of 12, the “unruly” but vastly talented youth decided to quit school and head for the Chicago, to become an itinerant street musician. On his travels, he would stop for the bright lights of New Orleans where he would pick up on odd jobs and busking. He would proceed to Memphis Tennessee, and then over to Helena Alabama, and also Arkansas and St. Louis Missouri, and then finally grounding down into the Windy City in around 1946. The thriving Maxwell Street strip clubs offered a spot for the still-teenaged phenom to hawk his wares, where he played with Tampa Red, Bill Broonzy, and Memphis Slim.

During this time, he also honed his musical skills on guitar performing with much older bluesmen such as Sonny Boy Williamson II, Sunnyland Slim, and Honeyboy Edwards, but garnered more attention for his already highly developed harmonica work.

Ora-Nelle. Little Walter would have been around 17 when made his first debut recording for Bernard Abr 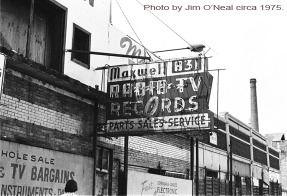 ams’ tiny Ora-Nelle label in 1947. The label was set up out of the back room of Abrams’ Maxwell Radio and Records store and only operated for a year or two. In that time the label only managed two releases, although 10 sides of alternate takes and unreleased material have since been discovered. Ora Nelle was named after a female relative, and the release series began at 711, not for numerological reasons, but on account of the winning combinations when shooting dice.

as the first label to record Little Walter, although according to fellow Chicago bluesman Floyd Jones, who suggests Walter’s first recording was an unreleased demo recorded soon after he arrived in Chicago on which Walter played guitar backing Jones. Ora Nelle was the only label to record guitarist Othum Brown, and the second to record guitarist Jimmy Rogers. On the debut 771A side we have the hard and heavy Ora-Nelle Blues, with Othum Brown accompanying Walter’s  harp skills. Lovely stuff! And on the 711b flip, there’s the much faster foot stomping tune called I Just Keep Loving Her. Incredible! Still trying to confirm whether Othum or Walter sang on these tracks.

Note that the label never had distribution; Ora Nelles were sold out of the store, where copies were still in stock 20 years later, or resold by people who had bought them there. Good luck finding this original 78!

Little Walter joined Muddy Waters’ band in 1948, and by 1950, he was playing acoustic (unamplified) harmonica on Muddy’s recordings for Chess Records. In October of that year, they recorded the Waters classic Louisiana Blues. Nearly a year after Little Walter used an amplified harmonica for the first time on a groundbreaking July 1951 session that yielded She Moves Me.

Little Walter reportedly grew frustrated with having his harmonica drowned out by the electric guitars, but would soon find a way to attack that problem. He adopted a simple yet effective method…he cupped a small microphone in his hands along with his harmonica, and plugged the microphone into a public address system or guitar amplifier. And now he could compete with any guitarist’s volume. There were other contemporary blues harp players such as Sonny Boy Williamson I and Snooky Pryor, who had also begun using the newly available amplifier technology for added volume, however Walter purposely pushed his amplifiers beyond their intended technical limitations, using the amplification to explore and develop radical new timbres and sonic effects previously unheard from a harmonica, or any other instrument. Madison Deniro wrote a small biographical piece on Little Walter stating that “He was the first musician of any kind to purposely use electronic distortion.”

Waters was among the earliest to recognize that blues possessed a formidable power when electrified, and along with Jimmy Rogers on electric guitar, Muddy had himself  the hottest blues band in Chicago.

Little Walter And His Jukes – Walter had put his career as a bandleader on hold when he joined Muddy’s band, but stepped back out front once and for all when he recorded as a bandleader for Chess’s subsidiary label Checker Records on 12 May 1952. The first completed take of the first song attempted at his debut session became his first release. The cracking instrumental was called Juke (the retitled Your Cat Will Play), and it was the first real success for him. Deservedly, it topped the R&B charts for eight weeks, and is still the only harmonica instrumental ever to be a number-one hit on the charts, securing Walter’s position on the Chess artist roster for the next decade.

Walter’s now had a pretty impressive band to himself, recruiting a young backing band that was already working steadily in Chicago backing Junior Wells, The Aces. They consisted of brothers David Myers and Louis Myers on guitars, and drummer Fred Below, and were re-christened “The Jukes” on most of the Little Walter records on which they appeared. Their first recordings were for the Checker subsidiary of Chess in 1952.

Some great stomping 45’s were to follow in the next couple of years including Crazy Legs which was released in ’53, Rocker from ’54, and  Hate To See You Go, released in ’55. But for this post I’ve decided to showcase this fab Little Walter And His Jukes EP for a couple reasons! Firstly, that packaging! The art is eye popping and graphic, and the label itself with the gold text on the deep red, is just class in it’s purist form. Secondly, here’s a few of what I think are Little Walters’ best tracks, all one the one 7″!

My Babe, which was written by Willie Dixon, who also wrote (Little Red Rooster and I Just Want to Make Love to You), was originally released in 1955 on Checker Records. This composition was based on the traditional gospel song This Train (Is Bound For Glory), a hit when recorded by  recorded by Sister Rosetta Tharpe in 1939. Dixon reworked the arrangement and lyrics from the sacred (the procession of saints into Heaven) into the secular (a story about a woman that won’t stand for her cheating man). The song was the only Dixon composition ever to become a #1 R&B single. (Note that Ray Charles had famously, and controversially, pioneered the gospel-song-to-secular-song approach also, and just prior to Walter’s release, with his reworking of the gospel hymn It Must Be Jesus into I Got A Woman,which hit #1 on the Billboard R&B).

Backing Little Walter’s vocals and harmonica were Robert Lockwood and Leon Caston on guitars, Willie Dixon on double bass and Fred Below on drums. Guitarist Luther Tucker, then a member of Walter’s band, was absent from the recording session that day. My Babe was re-issued in 1961 with an overdubbed  female vocal backing chorus and briefly crossed over to the pop charts. Ricky Nelson would release a far more pop version in 1958, while Dale Hawkins released a pretty fiery rockabilly version that same year.

I Got To Go is an up-tempo rocker reminiscent of his earlier 1953 Tell Me Mama…and this really is a rocker in it’s full glory. His playing of minor key scales over the major chord guitar backing adds, to a tension and energy to the piece as does his slightly fuzzed out vocal! Wild blues!

Roller Coaster, I have to say, is one of my favourite Walter tracks, and it’s the tasty icing on this sort after EP! His take on Diddley’s groover is quite sneaky, before it takes off with electrifying force. One glorious minor chord arpeggio throughout, nice and low and slithering, and it’s not long before Walter’s expressive tones really start to howl up a nice, maybe even gentle storm. With Diddley himself providing some rattling fretwork alongside the snappy kick and snare, it is just nothing but a blues dance floor masterpiece!

Thunderbird, the fourth track on this Ep, shouldn’t be ignored either, with it’s strong hustling locomotive rhythm. A more mild tempo possibly, but that does not deter Little Walter for a moment, as he burns up his harmonica skills quite feverishly and cleverly. Originally flipped to the 10″ My Babe, I’m almost certain this is the only 45 it was released on. Even another reason why you must seek this 7″ down!

Between 1952 and 1958, Little Walter on his own, charted 14 Top Ten R&B hits for the Chess label’s Checker subsidiary, including two number one hits, a level of commercial success never achieved by his former boss Waters, nor by his fellow Chess blues artists Howlin’ Wolf & Sonny Boy Williamson II. In the first part of the sixties he traveled to England winning over a new audience of white blues fans, and in 1964 he toured with the Rolling Stones (although this seems to have recently been refuted by Keith Richards). But Walter’s once phenomenal instrumental skills also diminished during the 1960s, plagued by alcohol abuse, a quick temper, and the bluesman’s penchant for barroom brawls. He did have a mean streak, and would never back down from a fight…and it was this belligerent attitude which lead to his death, after suffering head injuries from a street brawl. On Feb 1968, in Chicago, he sadly passed away at only 38 years old, a victim of his own indulgence. 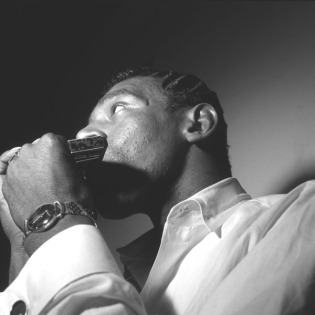 Of all the great bluesmans who were part of Chicago blues school, he is the only one that has never been imitated. He’s solos were carefully constructed masterpieces of energy that were never self indulgent. With his precision and control he was able to regulate the length power and sharpness of every note he played with furious yet calculated speed. His influence remains inescapable to this day, and it’s unlikely that a blues harpist exists on the face of this earth who doesn’t worship Marion “Little Walter” Jacobs. He was a skilled guitarist, and hell of a singer and songwriter, and is widely considered the greatest blues harmonica player ever. From the outset, he was a true original, a visionary musician and his influence goes beyond harmonica players.

Little Walter was inducted to the The Rock and Roll Hall of Fame in 2008 in the “sideman” category, making him the first and only artist ever inducted specifically as a harmonica player. His grave remained unmarked until 1991, when fans Scott Dirks and Eomot Rasun respectfully had a marker designed and installed.

Footage of Little Walter backing the great Hound Dog Taylor and Koko Taylor on a television program in Copenhagen, Denmark on 11 October 1967 was released on DVD in 2004 (performing Wang Dang Doodle). Further video of another recently discovered TV appearance in Germany during this same tour, showing Little Walter performing his songs My Babe, Mean Old World, and others were released on DVD in Europe in January 2009, and is the only known footage of Little Walter singing. Try and find it…sometimes some clips appear on you tube for brief moments. Amazing!