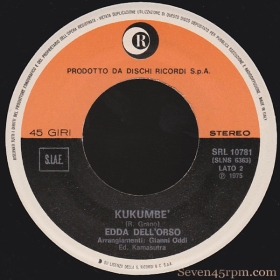 As that saying goes, behind every great man, there is a great lady, but there was more than one that strengthened one particular composer’s work if we’re talking about Morricone. A key element so important to his sound, Morricone would expose and you could even say, flaunt his leading ladies up front in the mix down, even if they were at the time providing background sounds or atmospheric vocals.

I’m going to parallel two posts celebrating two important women with names that are synonymous with Morricone, particularly from the 60’s and 70’s, when that era of his film scores were infamous for that beautiful sensual psychedelic and at some times haunting sound. But I also want to present other composer’s that all contributed to that now distinctive classic Italian cinematic sound if that time. This post I’ll be looking into an Edda Dell’Orsa composition she undertook for one of those other composers, and with a follow up post, I will pursue a journey into the works of Maria Cristina Brancucci, also known as Christy. As always, I wish I was able to enlighten you all with more information about Dell’Orso’s musical journey, but facts and life details are a little mysterious and not too easy to come by. However I will go through a bunch of my favourite Edda tracks and touch on some of those great composer contributions.

Edda Lucia Sabatini, was born in Genoa, Italy on February 16, 1935 and married pianist Giacomo Dell’Orso in 1958. She studied singing and piano at the National Academy of Santa Cecilia in Rome from around 1958, and in time she would possess a beautiful soprano voice with a three octave range that would stamp many now legendary composers work.

Around the mid sixties, Morricone was the first composer and conductor to use her astonishing voice for a feature film, and with immense artistry, he created unforgettable innovative vocal lines and sound effects. One of those early soundtracks was for Sergio Leone’s 1966 Il buono, il brutto, il cattivo (The Good, the Bad and the Ugly) and it includes one of the most celebrated Morricone’s themes, The Ecstasy of Gold, which is played while Tuco is frantically searching a cemetery for the grave that holds $200,000 in gold coins. This amazing piece of cinematic music has been covered from Yo Yo Ma to Metallica, but as famous as this soundtrack is today, Edda was actually was uncredited for her part.  The soundtrack album was on the charts for more than a year, reaching No. 4 on the Billboard pop album chart and No. 10 on the black album chart. The main theme was also a hit for American musician Hugo Montenegro, whose rendition on the was a No. 2 Billboard pop single 2 years later in 1968.

This was an incredibly busy period for Dell’Orso recording from film to film, studio to studio. Westerns were of course very popular after the success of A Fistful Of Dollars, and the hard working Dell’Orsa kept providing the goods, including the very moving titled track C’era una volta il West (Once Upon a Time in the West) for Sergio Leone in 1968, another Morricone partnership (1*). Again in ’71, another fitting title track with the quirky Giù la testa for Leone’s Duck, You Sucker! (also known as A Fistful of Dynamite and Giù la testa), but she also worked far beyond the Italian West. 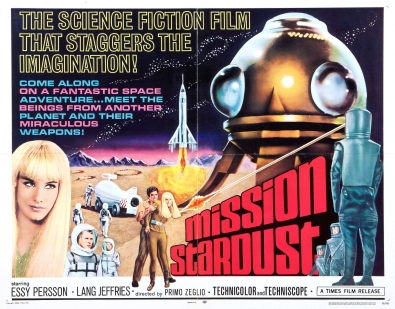 In 1967 Dell’Orso scores the opening swinging title song Seli, for the Italian science fiction film Mission Stardust (…4 …3 …2 …1 …morte), composed by Antón García Abril & Marcello Giombini. Some fans of the genre consider this offbeat film so appallingly bad that they playfully deny its very existence, however this rare soundtrack is also called a masterpiece by many jazzy lounge aficionados, which I tend to support. The next year Dell’Orsa contributes to the infamous Danger: Diabolk soundtrack, offering 3 alternate versions of Deep Down…The Shower, Eva’s Holy Dress and the tripped out, whimsical Emerald Bikini version. The title track was performed by Christy, another female legend of the Italian cinema soundtrack that Morricone liked to work with. 1969 offered up a true classic Dell’Orso-Morricone cooperative, with Metti una sera a cena for the Italian drama film of the same name, directed by Giuseppe Patroni Griffi. One of my favourites.

Dell’Orso moved into another film genre with the thriller La stagione dei sensi (Season of the Senses), bringing with her the lovely bossa styled Una Voce Allo Specchio. The title track for Giuseppe Patroni Griffi’s 1969 drama, Metti, Una Sera A Cena, is classic and rich in Dell’Orso spices, and was covered a few years later quite nicely by Milva. The 1967 chilling score for Bruno Gaburro sci-fi  post-apocalyptic Ecce Homo I Sopravvissuti, which gave Morricone an alternate opportunity to get down low into the darker side of Dell’Orso’s vocal soul, and the outcome is a soundtrack which offer varied versions of Venuta dal mare throughout, that all raise the hairs. Staying on the horror theme, Dell’Orso contributed to two films by Italian shock horror director Dario Argento, the first in 1970 called  L’uccello Dalle Plume di Cristallo (The Bird With Crystal Plumage), and then for Perche Si Uccidono? (Why Do They Kill Themselves), a film essay about drugs and self-destruction. For the latter 1976 film, the score was a collaboration with composer Fabio Frizzi and instrumental band Goblin (often used by Argento), under the pseudonym of Il Reale Impero Britannico.

Dell’Orso was also providing her voice for other prominent, mostly Italian composers of those times, and was also a key figure of the I Cantori Moderni choir, which was founded by Morricone’s childhood friend and composer Alessandro Alessandroni (2*)(3*). Piero Umiliani was one composer that regularly worked with Edda & I Cantori Moderni, and some of the best Dell’Orso work came from this collaboration. One of Umiliani’s most recognised tracks is Mah Na Mah Na, which he did for Svezia, Inferno E Paradiso, a 1968 pseudo-documentary about sexuality in Sweden, which ironically was later popularized by Sesame Street and The Muppet Show. Another Umiliani-Dell’Orso standout is the fuzzed up Le isole dell’ amore, for the 1970 film with the same title, which to be honest I know absolutely nothing about! Another soundtrack worth mentioning from the same year, is the impossible to find whacked out 5 Dolls for an August Moon, originally titled 5 Bambole per la Luna d’Agosto, and directed by Mario Bava (4*). Also check out the very chic Luna Di Miele, which was recorded for the documentary directed by Mino Loy and Luigi Scattini called Questo Sporco Mondo Meraviglioso, and includes whistling by Alessandro Alessandroni.

So lets now move on to the feature 7″ which was recorded for Giorgio Moser’s TV special Le Montagne Della Luce. Kilimangiaro is a beautifully produced composition with Dell’Orso’s trademark atmospheric artistry. Arranged by Gianni Oddi and composed by Romolo Grano, this track alone is well worth the effort it will take to find this rare thing. However while the titled A side was probably the selling point, it’s the magnificent B-side Kukumbe, that I think is the dynamic and most grooviest track she’s worked on. Big breaks, fender rhodes, jazzy trumpet, congas and top scat vocals by Edda, all amount up to a very sizeable and rhythmic killer production. I’ve been fortunate enough to play this on a big sound system and it was real fun! That bass drive grooves very nicely with that back beat. Now if you’re hoping that there’s a few Dell’Orso 7″s that you need to get a hold off, well in fact as far as I know there are only a few officials, one other being an earlier release from ’69 titled Sospendi Il Tempo, for the psychodrama La stagione dei sensi.

Dell’Orso would continue to record for many soundtracks and collaborate with many musicians. There was a very pertinent chemistry delivered in 1974 when Dell’Orso voice was utilized quite significantly on Italian master guitarist Bruno Battisti D’Amario’s album Samba Para Ti, which includes the beautiful spaced out Show Samba and the frantic upbeat Playa Sin Sol. The following year proceeded with a second team-up album called Granada and includes the standout upbeat latin dancer Su Delicia and a very cool version of Ipanema. In 1976 she worked alongside her hubby’s brother Gianni Dell’Orso, and laid down the sexy discotheque track Night Magic for Mondo Di Notte Oggi (directed by Gianni Proia), a soundtrack which has some nice funk moments, in particular on Soul Meeting.

Many years later in 2011, Danger Mouse and Daniele Luppi released Rome, a soundtrack for a non-existent movie, that took five years to record. Obviously die hard fans of that era of Italian cinematic sound, the producers had their hearts set to develop the sound and process as authentic to that time as possible. The album was recorded using only vintage analogue recording equipment and musical instruments fro 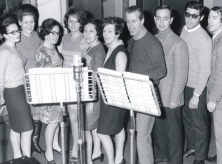 m the 1960s and 1970s. They also took the opportunity to reunite Alessandroni’s Cantori Moderni choir, who had not performed together since the early 1980s. Dell’Orso’s beautiful voice can be heard on the Theme of Rome track. The album also features vocals by Norah Jones and also Jack White who also provided the lyrics for his three songs. Even more recent, Dell’Orso was picked up by Alex Puddu, another true devotee of Italian vintage sound, to work on his 2013 album Registrazioni Al Buio, where she laid down 3 very smooth tracks (5*).

To try and cover all the composers, producers and productions Edda Dell’Orso worked with especially in the specific 60′ to 70’s period, would be a bit of a feat, and true fans will agree that I’m really only scratching the surface here. Her work is the epitome of intelligence and sophistication and she is the sound of Italian cinema, and remarkably she still continues to perform today with her strong distinctive voice. And obviously there’s a lot more we can talk about, regarding those great Italian composers that she worked with, that thankfully are now getting the praise they have always deserved. In time I’m hoping to cover a special selection of favourite cinematic Italian 7’S, but for now, stay tuned because there will be a follow up post tomorrow, celebrating another Italian female legend of the cinema soundtrack, Christy!

(2*) Alessandroni  was an accomplished whistler, and he can be heard quite famously on numerous Leone’s western soundtracks, and also was responsible for THAT twangy guitar riff that is central to the main theme for The Good, the Bad and the Ugly.

(4*) Mario Bava’s work from the “golden age” of Italian horror films is said to have kick-started the giallo film genre and the modern “slasher film”. He was also a special effects artist and had all director, screenwriter, and cinematographer credits for many movies including Danger: Diabolik, Planet of the Vampires, The Whip and the Body,  Black Sabbath and Kill, Baby, Kill to name but a few.