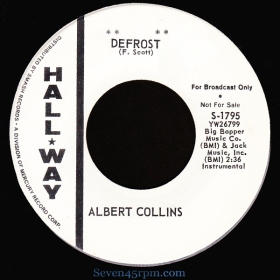 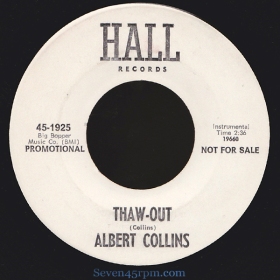 Albert Collins was born on 1 October 1933, and was raised by two farming parents in Leona, Texas, approx. 100 miles north of Houston. He was introduced to the guitar at an early age through his cousin Lightnin’ Hopkins, also a Leona resident, who frequently played at family reunions. In 1938 his family relocated to the third ward district in Marquez, eventually settling in Houston in 1941, where he later attended Jack Yates High School. Collins initially took piano on lessons when he was young, but during periods when his piano tutor was unavailable, his cousin Willow Young would loan him his guitar and taught him the altered tuning (that he used throughout his career). His idol when he was a teen was Hammond B-3 organist Jimmy McGriff, but the growing teenager made the decision to concentrate on learning the guitar after hearing Boogie Chillen‘ by John Lee Hooker. 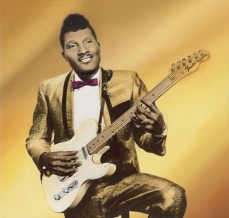 Aged 18, Collins started his own group called the Rhythm Rockers (a seven-piece group  consisting of alto, tenor, trumpet, keyboards, bass, and drums) in which he honed his craft. But Collins would still hold his jobs which around this time, included working on a ranch in Normangee, Texas for four years, followed by twelve years of driving a truck for various companies. In 1954 Collins, then aged 22 and still without a record release, was joined in by the 17-year-old Johnny Copeland who had just left the Dukes of Rhythm (a band he had started with Houston blues musician Joe “Guitar” Hughes).  Collins started to play regularly in Houston, most notably at Shady’s Playhouse, where James “Widemouth” Brown (brother of Clarence “Gatemouth” Brown) and other well-known Houston blues musicians would meet for the Blue Monday jams.

By the mid 1950s he had established his reputation as a local guitarist of note and had started to appear regularly at a Fifth Ward club called Walter’s Lounge with the group Big Tiny and The Thunderbirds. The saxophonist and music teacher Henry Hayes had heard about Collins from Joe “Guitar” Hughes. After seeing him perform live, Hayes encouraged Collins to record a single for Kangaroo Records, a label he had started with his friend M. L. Young. Collins recorded his debut single The Freeze b/w Collins Shuffle, for Kangaroo Records at Gold Star Studios, Houston, in the spring of 1958, with Henry Hayes on saxophone. Shuffle is an upbeat rippin R & B groover while Freeze, in contrast, is a slow but deadly creeper with sharp plucking knife cries that Collins is so now renown for. What an incredible wax debut, and a sure definite sign of things to come from this master!

That debut 7″ really was just the begins of a long run of singles which Collins would release the next few years, for regional labels. Conflicting research is telling me that he’s big million seller Frosty (though it apparently never landed on any national chart, so it’s not easy to check that claim’s veracity), happened for him in ’62. However it looks like the release date for that one was in fact in ’64, after being recorded at Gulf Coast Recording Studio, Beaumont, Texas, for Hall Records. Owner Bill Hall, had signed Collins on the recommendation of Cowboy Jack Clement, a songwriter and producer who had engineered sessions for Jerry Lee Lewis and Johnny Cash at Sun Records. Possibly there’s an earlier pressing that I can’t find any info on?

In 1963 he recorded De-Frost, a low grinding icy cool instro that burns like cold fire. With driving percussion, keyboards and horns, it’s embodies and slowly devours the listener. From that very first guitar note, most blues lovers will pick that technique and sound, and call out “The Master of the Telecaster”. The following year in 1964 he recorded Thaw-Out, which is likely a reworking of De-frost, but this time the driving is now the ploughing! The shards are deadlier and sharper, and let me tell you that this is one for the early keen dance floor, who are eager to warm up the bones.

During this period, even more of Collins’ song titles were uniquely associated with freezing temperatures, like Tremble (1964), Sno-Cone and Dyin’ Flu (1965), Don’t Lose Your Cool and Frost Bite (1966). These singles, along with his cold, crisp guitar technique, earned Collins his nickname “The Iceman.” 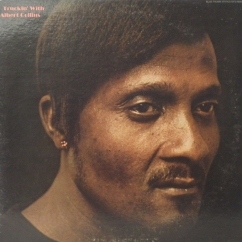 In ’65 Collins’ debut LP, The Cool Sound of Albert Collins (TCF-8002), was released by Hall. Mainly a collection of his singles with the exception of some label additions, Kool Aide (another De frost reworking?) Shiver N’ Shake the very sophisticated Icy Blue. In ’69 the Blue Thumb imprint repressed it with a new title and cover upgrade as Truckin’ with Albert Collins. Through the rest of the 1960s, Collins pursued his music with short regional tours and recordings for other small Texas labels while continuing with his work day jobs. In 1968, Canned Heat’s Bob “The Bear” Hite, had a very strong interest in the guitarist’s music, and took Collins to California, where he was immediately signed to Imperial Records. By later 1968 and 1969, the ’60s blues revival was still going on, and Collins got wider exposure opening for groups like The Allman Brothers at the Fillmore West in San Francisco, and playing the San Francisco psychedelic circuit.

Collins didn’t have a lot of success in the most part of the seventies and actually hid into retirement as a result. It was his wife that pushed him back up on his feet and just as well! In 1977 he was offered a record deal by Bruce Iglauer of Alligator records in Chicago, which led to his most successful release Ice Pickin’. It won the Best Blues Album of the Year Award from the Montreux Jazz Festival, and was nominated for a Grammy. Finally it was time for Collins to receive some of that overdue and so well deserved success. With his new signature backing band the Ice Breakers, he would release successful “cool” themed LP’s, and take home a bunch of awards. In 1987 he won his first Grammy Award for Showdown, an impressive three-way guitar duel with Johnny Copeland and the newcomer Robert Cray.

Collins’ technique, his “attack” guitar style, and his minor tunings, were incredibly influential. In the live setting he was known for his showmanship, and his stage presence was legendary, with his famous “guitar walks” into the crowd. It was not unusual for Collins to conclude his concerts with a grandiose exit from the stage by walking straight through the crowd (with the use of his legendary 150 foot guitar cord) and out the front door of the venue, to stand in the middle of the street wailing on his guitar while bringing the city traffic to a halt.

The Iceman was robbed of his best years as a blues performer, after a three-month battle with liver cancer that ended with his premature death on November 24, 1993. He was just 61 years old.

Encyclopedia of the Blues  By Edward Komara

Graded on a Curve By Joseph Neff 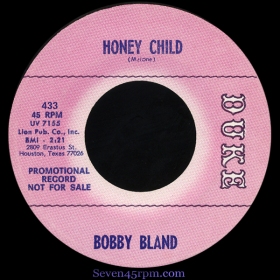 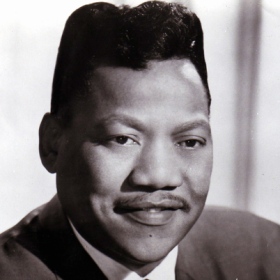 DUKE USA cat# 433 (promo)  Year 1964 Robert Calvin “Bobby” Bland was born January 27, 1930, in the small town of Rosemark, Tennessee, later moving to Memphis with his mother in 1947. He worked at a garage during the week and sang spirituals on weekends, singing with local gospel groups including, amongst others The Miniatures. He began frequenting the city’s famous Beale Street where he became associated with a like minded bunch  of aspiring musicians, who were referred to as the Beale Streeters (although they never used that name themselves), which included such future blues stars as Johnny Ace, B.B. King, Junior Parker, and Rosco Gordon .

Between 1951-52 he recorded four 7″s for Chess, produced by Sam Phillips, alongside Rosco Gordon and as The Bobby Blues Band. While the results of those recordings were not a huge success to say the least, that didn’t stop local DJ David Mattis from cutting Bland on a couple of 1952 singles for his fledgling Duke logo. That same year Bobby was drafted to serve his country, he went off  to war, and had to put his career on hold.

When the singer returned in 1954, he found that the Memphis he once knew was no more. Sun Records had found its fair haired boy, Rock and Roll was breaking down the old barriers between “race” and “pop,” and Duke Records had been sold to entrepreneur Don Robey, owner of Peacock Records in Houston, while several of his former associates, including Johnny Ace, were enjoying considerable success. But Bobby’s talent and maturity as a vocalist had exceeded even more in just those last years, and now Duke was ready to push Bland full steam ahead, with It’s My Life, Baby, Woke Up Screaming and Time Out all released in ’55. Bobby’s first national hit, which went to number 1 on the R&B charts, is the driving Farther Up the Road, which was released in 57′, and burns almighty with the insistent guitar riffing contributed by Pat Hare, another vicious picker who would eventually die in prison after murdering his girlfriend and a cop. In ’61 the beautiful I Pity The Fool and the great soul number Turn On Your Love Light also did well for Bobby and deservedly so.

Bland spent the latter half of the Fifties maturing into a masterful singer and assured entertainer. From 1957 to 1961 he played the chitlin’ circuit with Junior Parker and his band, the Blue Flames. But in 1961 Bland broke with Parker, went out on his own, and rose to his greatest popularity.

And now we jump to 1964, Honey Child, easily my pick of the crop from such a expansive field of BB soul jewels. And why this flip to Ain´t Nothing You Can Do is so over looked, I will never know! His distinctive silky smooth vocal style slides perfectly into the slinky, swinging rhythms, and it really pulls you in. And in a sudden, the sheer beauty of it all gets pretty overwhelming and inescapable. Adorable and modest guitar phrasing from Wayne Bennett complements the sometimes rampant yet soulful horns which I’m assuming only the great Joe Scott (trumpeter, band leader and Don Robey’s chief talent scout) could be responsible for holding this dance floor gem all together! 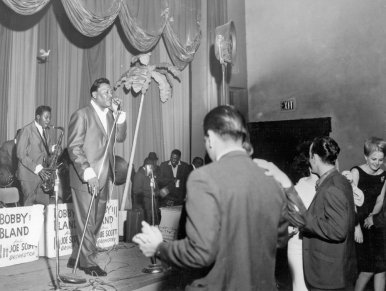 Bobby was sometimes referred to as the “Lion of the Blues”, and without a guitar, harmonica, or any other instrument to fall back upon, all he had to offer was his magnificent, charismatic voice. A voice unmatched in my opinion. With his captivating live performances (and a legion of female fans who deemed him a sex symbol even late into his career) he helped bring the blues out of Delta juke joints and into urban clubs and theaters. Bland’s records mostly sold on the R&B market and he had 23 Top Ten hits on the Billboard R&B charts and in the 1996 Top R&B book by Joel Whitburn, Bland was rated the #13 all-time best selling artist. I believe he is still performing to this day!

Note: I originally posted this entry back in early June 2013. He died on June 23, just 2 weeks later, at his home in Germantown, Tennessee, after what family members described as “an ongoing illness”. He was 83. After his death, his son told news media that Bland had recently discovered that musician James Cotton was his half-brother.