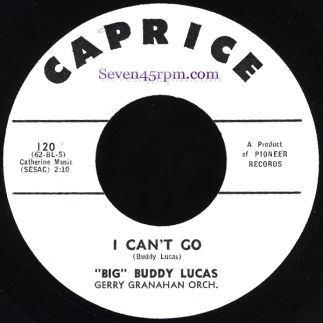 Born Alonzo W. Lucas, 16 August 1914, Pritchard, Alabama, Buddy moved to Stamford, Connecticut, at the age of three. In years to come, a good neighbour noticed the young 11 year old’s interest in music and gave him a clarinet. This kind act must have been the true begins of where it all really started for Buddy! In the late 1940s he went to New York City, where he met drummer Herman Bradley, who helped him get his gigs and record dates.

But it wasn’t until ’51, when Lucas would make his first vocal recording on Soppin’ Molasses, for Jerry Blaine’s Jubilee label. Jubilee specialized in rhythm and blues and was the first independent record label to reach the white market with a black vocal group, when The Orioles recording of Crying in the Chapel reached the Top Twenty on the Pop charts in 1953. Lucas became leader of the house band and renamed his combo “The Band Of Tomorrow”. Scoring a #2 hit on the R&B charts in 1952 with the slow revived Diane, may have given the saxophonist some attention, but the flip Undecided is far more foot tapping and exciting! This set the pattern for most of his following Jubilee singles : a lush ballad on the A-side and an R&B sax led instrumental on the flip.

Lucas had one other hit on Jubilee, Heavenly Father (I Love You is the much preferred flip), sung by Edna McGriff (# 4 R&B in 1952), before moving on to RCA and its subsidiary Groove. Releasing a handful of 45’s, including the raw Greedy Pig, my pick of this bunch would have to be the Groove two sider My Pinch Hitter (along side Almeta Stewart, who I honestly have to say, I do not know enough about) and of course the great flip I Got Drunk! The title alone tells you that this here track was always going to be good! Also No Dice (flip to High Low Jack), should NOT be ignored, as Buddy really gets the opportunity to have some sexy fun with his sax and harmonica skills here!

From ’56 to ’57, Buddy had seven 45’s released on Bell Records, a budget label specializing in covers of the big hits of the day, including Hound Dog….okay stuff. BUT also in ’57, he comes out with the hammering Bo-Lee, on the Luniverse Records label.  Established in 1956 by struggling songwriters Bill Buchanan and Dickie Goodma, but ceasing production in 1959, this label, with a few exceptions, were nearly all Buchanan-Goodman titles. As much as I admire Budy’s instrumentals, I think his vocal releases are just the bomb, as is the case with Bo-Lee!

in 1958, he became the nucleus of the Gone All Stars, George Goldner’s session band for his Gone Label. Fun stuff, but no real earth shaking releases, well especially compared to the previous Luniverse monster.

Many more releases were to come in the next few years from Lucas on various labels including Vim, Tru-Sound and Pioneer (I recommend Get Away Fly on the latter label), but let’s move to 1963 and this mind blowing Caprice release!

At just age 28, Gerry Granahan became the youngest record executive in the music biz to that time, when he formed his own company, Caprice Records. He was a former disc jockey at WPTS in Pittston and in 1957, he was the first white artist on the Atlantic’s subsidiary label, Atco. He had a lot of success with numerous solo and group projects (including as pseudonym Dicky Doo and the Don’ts and group The Fireflies), but in 1960, he found being a performer, composer and producer for all his different acts, was too much to handle and realized his future success would come from sitting on the other side of the desk. Granahan had used Buddy’s talents on some of his own previous recordings, so it’s no surprise he brought him over to his new label. I can’t really find out much about the Gerry Granahan Orchestra that accompanies Buddy’s composition. While the label did have some major successes (and why this track wasn’t one of those I’ll never understand…although I have to suspect poor marketing perhaps?), the label folded in ’63 due to some dodgy “off the books sales” from a business partner.

I Can’t Go is an absolute Big Buddy gem! He writes about finding love and fame, and not holding onto to either tight enough. It’s blues…I guess…but so contradictorily upbeat! The cheeky keyboards, the wriggling bass and the outstanding dry production are all perfectly synced. Sometimes I really struggle to understand how music can be this great! And I’d love to find out who is responsible for the fabulous backing vocals…perhaps again former Granahan collaborators?

After researching this great musician, it seems evident that Buddy is much more known and credited for his prolific tenor sax and harmonica contributions, than as the cool cat vocalist that he certainly was. And he did put down some mean grooves with plenty of talent. In the 50’s he worked with Frankie Lymon & The Teenagers on Why Do Fools Fall In Love, and also with Little Willie John on his remarkable Fever take! He would work with blues and soul queens Big Maybelle, Big Mama Thornton, Aretha Franklin, Roberta Flack and Nina Simone! He would also get wild with Bernard “Pretty” Purdie, Yusef Lateef,  Jimmy Smith and Count Basie. It’s obvious that here was a man with incredible talent to share, and I’m sure many friendships were made in his lifetime. And while his recording credits can be all laid out to a point without too much unraveling, it kinda saddens me that I can’t seem to find out much more about the man himself, behind those great notes, with such an important historic relevance to soul and blues. There must be interviews out there somewhere with either himself or collaborators. Even some photos?!

Buddy would continue to work with countless more musicians including Hendricks and George Benson, offering his harp and sax skills. In 1980, Buddy had his right lung removed after cancer was discovered, but continued to play alongside his old friend Herman Bradley, that he meet back in the ’40’s. In December 1982, due to ill-health, he finally had to give up doing what he loved most. He passed away on March 18th, 1983.

And some definitive reading on Caprice Executive Gerry Granahan