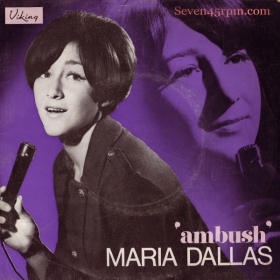 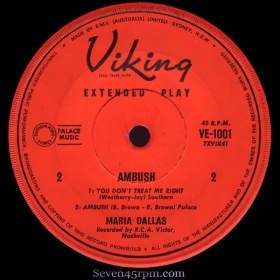 I only just recently stumbled across this gem in a box of random rough 45’s in my favourite local record store, but somehow, I just knew there was going to be a little “something special” about it, so I grabbed it. When I got home, I polished it up, flicked the switch to 45 and placed the needle down. Yeah, it was alright, straight country beat…but as track 2 on 2 started up, a feeling inside told me to turn up the volume…and that something special was certainly affirmed! I had to find out more about Miss Dallas!

So I start to dig around for some history lessons on who I thought was certainly a Nashville singer, but to my surprise, I find out that she is in fact currently living here in the north of Australia, in Queensland. But that wasn’t the only surprise…she was actually born and breed in New Zealand!

And once again, I find that not a lot of information can be found on her, but I wil try and gather what I can, mash it all together, with hopefully some facts here and there.

Marina Devcich was born to a Croatian family, on April 14th 1946, in the provincial town of Morrinsville (in the Waikato region of New Zealand’s North Island) and was the second youngest of twelve children. She was gifted with a distinctive voice which you seriously could compare to say, Wanda Jackson, with a stir of Brenda Lee.

o was a hairdresser at that time) and Isabel Leigh won a Johnny Cooper talent quest in Morrinsville. Further solo performances with the Lew Manson Band around the Waikato area followed. One night in 1965, she was booked to appear in a Morrinsville hotel with Howard Morrison (who started up the very popular Howard Morrison Quartet with guitarist Gerry Merito) and Auckland bandleader Mike Perjanik (who formed The Mike Perjanik Band after departing The Embers, and would go on produce the “sound” for the NZ beat girls The Chicks, write hits for Dinah Lee and arrange for Ray Colombus).

Perjanik went straight back to Auckland to tell Viking Records’ chief Ron Dalton that he’d found his next star in the Waikato. Dalton decided to rename her Maria Dallas, and almost overnight the girl with the power packed voice found herself in an Auckland professional recording studio. 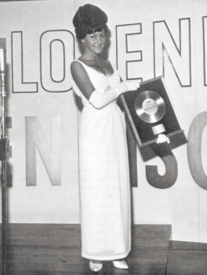 In ’66, Viking released a bunch of 7’s for Dallas including an EP titled Queen of the House (VE 224), which included a very oddly produced version of How Does That Grab You Darlin’, with very kooky keyboard backing. But it was her recording of Jay Epae’s Tumblin’ Down, that would bring her success! It in fact became a massive hit and it would be Maria’s signature tune. The song made it to number 11 on the national charts and was entered into the Loxene Golden Disc Awards, where it took first place!

Tumblin’ does have a catchy pop quality to it, and it has grown on me. It is also included on this EP, but it certainly isn’t the star on this spinner as far as I’m concerned. That title goes to…well…the infectious title track…Ambush! With it’s big kick start, instantly we have fuzz guitar, searing keyboards, and killer cool backing vocals. And who doesn’t love a song that starts straight into it’s punchy chorus?! This track has got a lot of sass to it…that kinda Ann Margaret sass (well I think it does), and it’s relentlessness makes it a good dance floor shaker! And it looks like it made it to number 12 in Oz, in October of 1967!

Viking churned out six albums during 1966 and 1967, and a similar number of singles. None of the singles fared as well as Tumblin’, and despite it’s success, Maria never felt at home as a pop singer, so she would return to her country music roots. She moved to Australia in late ’67, before venturing off to Nashville where she recorded in the famous RCA Victor Studios with producer Felton Jarvis (who was working with Elvis at this period and almost until his death) and also with Chet Atkins.

Although singles were still released during her absence, New Zealanders had almost forgotten about her until she returned in 1970 with a song called  Pinocchio, which went all the way to number 1 on the national charts. Viking capitalised by releasing another album in 1971 and a follow up in 1972, but Maria wasn’t able to reproduce her success after that. She would also release a few more singles on the Kontact label, in ’73, ’75 and even up to ’81.

Maria married an Australian an has lived here for many years. I would love to hear from anyone who knows how she’s doing!