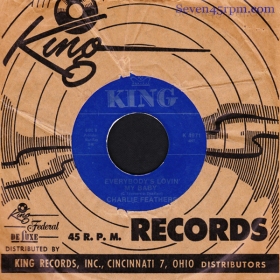 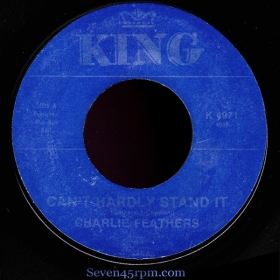 In the music world, earning a legendary status doesn’t necessarily stem from hits, success and riches. Such is the case with the highly influential and respected rockabilly wonder, Charles Feathers. Yet this unique talent who was there in the Sun sound booth spurring on a young Elvis, never even saw a billboard credit.

Charles Arthur Feathers was born in Slayden, Mississippi, just outside of Holly Springs, on June 12, 1932. Growing up on his parents farm, he became interested in music at a young age, singing in church and regularly tuning in to WSM’s ‘Grand Ole Opry’. The Opry was where young Charlie would find his earlier influences like Bill Monroe, but he’d was also picking up on the sounds of the Negro sharecropper’s who worked the fields in the Mississippi backwoods. One field hand in particular, Junior Kimbrough, introduced him to the acoustic guitar, providing him with valuable lessons which he eagerly absorbed.

By the age of nine, Feathers had become an adept guitarist and was beginning to develop his unique vocal style, which likely was patterned after that of his hero Bill Monroe. Honky tonk great Hank Williams’ MGM recordings of the period also impressed Charlie greatly. He could understand and appreciate the feeling in Hank’s lonesome hillbilly whine, and it soon rubbed off on him.

left school at a very early age, after the second or third grade, likely around 1948. He struggled finding any employment, so he traveled to Cairo, Illinois to work the oil pipeline’s with his father. This work later took him to Texas where Charlie, guitar in hand, hit the honky-tonks and juke joints in his spare time, providing him with valuable experience in playing the live circuit. In 1950, 18 year old Feathers moved back to Memphis where he got hitched. He also started working for a box manufacturer until a bout with spinal meningitis left him hospitalized. While bed ridden, he listened to the radio incessantly, and would emerged from his stay with drive and determination to become a professional singer.

By 1954, Feathers was working his way into the confines of Sam Phillips’ Memphis Recording Service, with an eye toward getting something released on Sun Records. He filled in whenever and wherever he could, helping with arrangement ideas, even playing spoons on a Miller Sisters recording, Someday You Will Pay. He soon scored a very important writing credit along with engineer-steel guitarist Stan Kesler on the Elvis 7″, I Forgot to Remember to Forget. Released on August 20, 1955, this Sun 7″ is flipped with the gorgeous Junior Parker song (billed as “Little Junior’s Blue Flames” on the Nov. 1953 Sun release) Mystery Train! 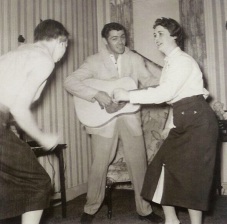 Phillips decided to start up a non-union label called Flip to test out new local artists. He paired up Feathers with country session songwriter-musicians Bill Cantrell and Quinton Claunch, and released Charlie’s first single on that label, Peepin’ Eyes, flipped with I’ve Been Deceived. Released in April 1955, the record did reasonably well on regional charts, selling approximately 2585 copies in that first month (1). An eager Phillips brought Feathers back into the studio on November 1, 1955 for a second session.

January ’56 saw the release of titles from that session, Defrost Your Heart and Wedding Gown Of White (Sun 231). Phillips had complete faith with Feather’s latest release, but obviously disappointingly surprised with the unexpected low amount of units sold (approx. 919) this time around. The lack of success was certainly a unjust mystery, as some would say the two tracks were just as strong as Charlie’s Sun predecessor. As Feather’s contract was due to expire soon, Phillips was unwilling to renew his commitment to him for a second term, as he was now devoting much of his time to Sun’s latest stars, Carl Perkins and Johnny Cash, whose flames were shining far more brightly than Feathers’.

But the artist had bigger visions. Now tired of being cast in the hillbilly mould, and eager to record rockabilly, Charlie set about reforming his band in order to cut this new sound (2). Booking studio time for January 31st, the band headed to 706 Union where they cut four proto-rockabilly styled numbers, Honky Tonk Mind, So Ashamed, Frankie And Johnny and Charlie’s own Bottle To The Baby. But the shackles tying Feathers to a hillbilly stereotype proved difficult to break and the hope to convince Phillips to extend his contract with Sun for another term, seemed hopeless. But luckily for Feathers, his talent had not passed completely unnoticed. 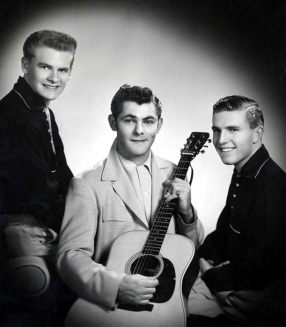 of Sun’s cross-town rival Meteor Records, who had become aware of Charlie’s rockabilly intentions and unique talent, invited him to visit his studio on Chelsea Avenue to cut a demo session. Along with lead guitar player Jerry Huffman and Jody Chastain, who had switched from steel guitar to string bass, they laid down the two-sided rockers Tongue-Tied Jill and Get With It. Acetates of the two songs were sent back to Phillips who was, by all accounts, uninterested in either song but, particularly Tongue-Tied Jill, which he considered degrading to the vocally impaired. But Bihari on the other hand, showed a keen interest, and coupled both songs for release in June (Meteor 5032), both on a 10″ and a 7″ in 1956. Despite the quality of the record and the surprisingly good sales, royalty statements were poor, prompting Huffman to state “The first check was such a pittance. We told him (Bihari) what he could do with it”. Now, with no contract, the trio began to flounder. That is, until they were approached by Syd Nathan’s strong Ohio based independent label, King Records. Alerted by a Memphis based distributor for King who had heard the Meteor disc, Nathan dispatched King’s country division A&R head, Louis Innis, to the southern locale to audition Charlie and his band. An immediate contract was organised, and with the ink barely dry, a refreshed group were in King’s Cincinnati studio to cut their first session for the label on August 18. Four tracks were laid down with dirt and authority, and it is here that Charlie Feathers’ rockabilly flame burns best.

His gift was apparent from the beginnings, and his 1956 King releases were all shine from the get go! The first King release for Charlie is my standout Feather’s 45, with the flaming echo laden Everybody’s Lovin’ My Baby on the A side, and the infamous flipped out flip, Can’t Hardly Stand It (King 4971 October 1956).

The lines are simple, but the infatuation is deep. Feathers sings this broken ballad while drunk on love, and I can’t help but feel, that if that little lady could only hear this howling call out on his six string, she would have him back in a smack! God I love this! Even his guitar feels sadness, like that of a loyal dog when he knows his master is feeling lost. One bass, one guitar and one bruised man, and you have an iconic Feathers classic. Again, many years later covered by The Cramps, and with that great electrifying shock wave manner that The Cramps do so well, but this song belongs to Feathers, and it’s him inside and out! From that same one day session, One Hand Loose and a reworked Bottle To The Baby (King 4997 December 1956) was released and is another two sider, filled with hot twangy stuttering goodness!

Very soon after, another four titles (3*) were cut in the studios on January 6th, 1957. Louis Innis oversaw the session and attempted to polish Charlie’s sound, by adding a vocal group fronted by Johnny Bragg. This cleaner “country pop” result I think it’s fair to say, didn’t really complement Feather’s style nor did it improve Charlie’s rockabilly reputation. In an attempt to expose Charlie to a wider audience and possibly sell more records, he was booked to play gigs with Sun label luminaries such as Warren Smith, Jerry Lee Lewis, Johnny Cash and Roy Orbison. Record sales were a defining factor to a performers success, so when Feather’s King records were still selling poorly, he was dropped from the company’s roster later that year.

Feathers had signed a one-off deal with Charlie Kahn’s Kay label in Memphis late in ’58, and  traveled to the WHBQ radio studio in Memphis to lay down four sides in December. After eighteen months away from a recording studio, Charlie’s originality had not worn away, and his fire was still well and alive, as the wild and glorious Jungle Fever proves (Kay 1001). But this searing rocker, along with the other 3 tracks recorded (4*) would not see the light the of day until June 1960. Kahn did not seem to appreciate the originality of the recordings, deciding to leave them in the can for almost two years.

Maybe it was an itch, or maybe built from frustration, but Feathers took a sharp turn off the rockabilly highway in ’59, when he teamed up with former Sun session men Bill Cantrell and Quinton Claunch, to record two folk inspired numbers Dinky John and South Of Chicago. These refreshing songs harked back to Feathers’ Bill Monroe influence and out shone the bland, typecast folk material of the day, yet Hi label boss Joe Cuoghi declined to push the recordings. Not to be easily thwarted, Charlie hawked the songs to Walter Maynard, who eventually put the record out in July 1960 on his Wal-May label under the pseudonym of Charlie Morgan. 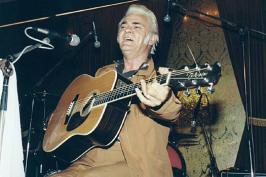 Feather’s would continue to release a handful more 7’s, with various willing labels. Some notables are Wild Wild Party, released in December 1961, Johnny Burnette’s Tear It Up flipped with the fab Stutterin’ Cindy, was released in ’71, and Uh Huh Honey in 1973. But by this stage of his career he was performing to ever dwindling crowds, and his priorities shifted elsewhere, like car racing and softball. As Billy Millar illustrated, “…Charlie gained such a rep around town as a top fast pitch hurler that many of his teammates were unaware of his musical exploits”. But Charlie was never far from his guitar and tape recorder. He would continue to record and perform throughout the 70’s and 80’s and even release a bunch of 7’s on his own private Feathers label, which were sold at his concerts. And in ’91 he released a self titled album, his final recording.

On August 25, 1998 Feathers suffered a stroke and was admitted to the St. Francis I.C.U in Memphis. Falling into a coma a day later, his condition deteriorated and he passed away on August 29. His passing was of course a sad loss to his family and friends, but also to his many admirers worldwide.While he may never have achieved the chart success that he well deserved, his legacy is concrete and will continue to spread tomorrow and the days after.

“Rockabilly is different. Nothin’ can touch it, man; and it don’t take a big band to do it…a lead man and a good acoustic rhythm and a big slap bass. Can’t beat it, man!” Feathers was a true die hard  believer of the “religion” til the last day.

1* Shortly after the Flip disc was launched onto the market, Phillips was forced to re-release the record on Sun proper (Sun 503), as he was threatened with legal action from one Ed Wells (owner of the Flip label) over improper use of label name.

2* With steel guitarist Jody Chastain brought into the fold, and very likely Jerry Huffman as the guitarist and one Shorty Torrance as string bassist.

3* Too Much Alike, When You Come Around, When You Decide and Nobody’s Woman.

4* Why Don’t You, and Jody Chastain’s release My My with instrumental flip Jody’s Beat (Kay 1001).

Rockabilly The Twang Heard ‘Round the World – Robert Gordon

Tip Top Daddy – Charlie Feathers, His Life and his Music by Shane Hughes