New Holidays – Maybe So, Maybe No 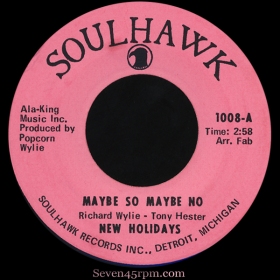 I thought researching this extremely beautiful and soulful New Holidays composition (and one of my top ten I must add) was either going to be fairly easy (such an outstanding recording from them…surely credit and facts should be well documented)…or quite difficult, (other than collector’s of fine soul records, it’s existence is fairly unknown).

But after only a few hours of researching, did I realise that the information on the “Holidays” was so mixed up and jumbled, and to make any sense of it all may just prove to be too overwhelming! THANKFULLY, good ol’ Soul Detroit has saved me again! Well in fact researcher Graham Finch is responsible for exposing what must have been an incredibly difficult ordeal, to sort through facts, lies and myths, that makes up the real story behind the Holidays!

And even with all the facts …it’s still a real brain trip to decipher, so I’m going to try and map out the path that will eventually get us to this one great song, with Holland at the wheel!

The Fresando’s – James Holland first recorded with the The Fresando’s in 1957 with the release I Mean Really on the Star label. The absolutely astounding flip Your Last Goodbye holds up a writing credit to Leo Parks (so-called manager at the time) but the truth is, it was chiefly penned by lead singer Aaron Little. The harmony group really shines here, up along side Eddie Bartell and his Dukes of Rhythm minimalist accompaniment.

The Five Masters -The Fresando’s record wasn’t a hit and in 1958 the five singers changed their name to The Five Masters and hooked up with Robert West, one of the first of Detroit’s recording pioneers to taste success – most notably with The Falcons. Their next release was We Are Like One  (flipped with Cheap Skate) on the Bumble Bee label, and although it was the Master’s who were responsible for writing this beautiful song, this time it was new manager Clyde Clemons, that took the credit. Their Bumble Bee disc failed to create much of a buzz, and in September ’59, the teenagers enlisted in the army, separating to different corners of the globe, from France to Korea and to even Alaska. When they arrived back to Detroit in ‘62, things had changed and it was the dawn of a new era, for music and the group.

The Four Hollidays – Once James Holland and the Barksdale brothers returned to Detroit from their military service, they immediately set about resurrecting their musical careers. They were joined by Johnny Mitchell, a friend of theirs who just had recorded with The Majestics for the local Chex label. They decided to call themselves The Four Hollidays.

Detroit now offered more opportunities than when The Five Masters had disbanded in ‘59, with the success of Motown Records, however there seemed to be some unfair play going on around town, leaving artists with no money regardless of their sucessful recordings, so the decision was to instead head to Chicago and audition for Vee Jay Records. It was the great Andre Williams who introduced them to Lenny Luffman, who signed them up to Markie.

The Four Hollidays first released the dance-fad song Grandma Bird in ’62, but it was the great flip Step By Step that became the seller, especially in Chicago where popular WYNR radio jock “Wild Child” Dick Kemp dubbed it the “47th Street Stomp”. This was reference to the street in Chicago’s Near South Side where Black American’s had created a vibrant community. It was also where Markie Records was based.

The follow up was in September ‘63 with I’ll Walk Right Out The Door (which seem to exist only as promotional copies), and although the group did their best to push the great tune, it didn’t do as well as their previous hit. Thankfully the success of Step kept them going on the club circuit for quite some time.

The 4 Hollidays – The group headed back to Detroit and scored a session at United Sound where they recorded Deep Down I My Heart with Jimmy leading, and He Can’t Love You in ’64. It was the maiden 45 for The Master Recording Company, but the fledgling company wasn’t really set up to properly promote and distribute the disc and consequently sales never materialized.

Jimmy and the Barksdale brothers now decided they should take charge of their recordings and start a business. Johnny Mitchell left the group to team up with the re-formed Majestics , James Shorter was recruited as the new fourth Holliday. Somehow they managed to pull together the $200 they needed to pay the studio and musicians, and recorded Set Me On My Feet Right / Happy Young Man but without hardheaded promotion and slick marketing, the company wasn’t able to push the first and what proved to be last 45 on the Holliday label.

By spring ‘65, The Four Hollidays had shrunk to one member: Holland. The two Barksdale brothers had taken regular jobs and James Shorter had signed with Lou Beatty’s La Beat Records. Jimmy decided to head back to Chicago, an soon recorded with Andre Williams the upbeat Baby Don’t Leave Me on Blue Rock (with a rippa’ punchy female-led intro’ and backing). Unfortunately this release didn’t take off and again only seems to have been pressed as a promotional 45.

It’s 1969, James returned to Detroit and formed a new group of “Holidays” with younger brother Jack, and Maurice Wise and the trio got a deal with LeBaron Taylor’s fast-fading Solid Hitbound Productions. He teamed up with George Clinton (who had already left LeBaron for Westbound Records and now had renamed himself and band, Funkadelic) and together penned  All That Is Required Is You. It was released on LeBaron’s Revilot label that same year. Now do not get confused with the The Holidays that had the previous two releases on the label…Holland’s group had nothing to do with that, and eventually the courts decided that due to the earlier success of Holland’s group, he would win the lawsuit that would allow ownership of the title.

Finally, in ’69, Holland hooked up with the mighty songwriting partnership duo Richard “Popcorn” Wylie and Tony Hester, and recorded the unbelievable Maybe So Maybe No. The flip side If I Only Knew, is a version of a song that Jimmy ‘Soul’ Clark had a recorded a year earlier. Note that on the Westbound release, you will find My Baby Ain’t No Plaything on the flip, Popcorn could sense the potential for a the hit and decided to put a stronger B-side which is actually not at all the New Holidays, but was in fact sung by a different group that included Bobby Martin, Herschel Hunter (both former Martiniques from the early 1960s), and guy named Fletcher, and Willie Harvey.

For some reason or another, the Westbound or Soul Hawk release didn’t takeoff…and I’ll never understand why!

So a journey of amazing talents and more than a fair share mighty fine bad luck and missed opportunities.

The Holiday story goes even further on, and the holes I’ve avoided are sometimes creators! But I highly recommend reading the full (?) breakdown of the compositions, band members and “sidestreets” here at Soulful Detroit!