Nina Simone – Come On Back, Jack 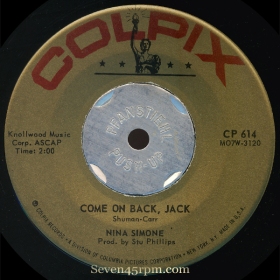 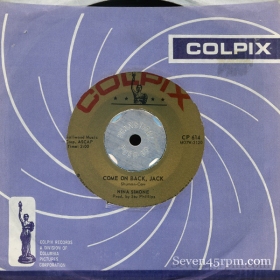 “She earned the moniker ‘High Priestess of Soul’ for she could weave a spell so seductive and hypnotic that the listener lost track of time and space as they became absorbed in the moment.” Official ninasimone.com.

As we all know, she was arguably one of the most important and influential women of the soul, blues and jazz genre, and I think the only real place to start a 45 collective journey is at the beginning. And it was in the early 60’s, a time when Nina was singing some of her most intimate and bluesy compositions of her career, when this little fiery monster surfaced amongst it all!

But first a little bit about Eunice Kathleen Waymon. She was born in Tryon, North Carolina on February 21st, 1933, the sixth child to a Methodist minister mother and a handyman and preacher father, and started playing piano by ear at the age of three. Her parents taught her right from wrong, to carry herself with dignity, and to work hard, which would in time mold her into the incredibly strong woman she grew up to be. She played piano in her mother’s church, displaying remarkable talent early in her life, but didn’t sing at that time.

Able to play virtually anything by ear, she was soon studying classical music with an Englishwoman named Muriel Mazzanovich, and quickly developed a lifelong love of Bach, Chopin, Brahms and Beethoven. After graduating from her high school, her local community raised money for a scholarship to study at Julliard in New York City before applying to the prestigious Curtis Institute of Music in Philadelphia. Eunice’s hopes for a career as a pioneering African American classical pianist were dashed when the school denied her admission. To the end, she herself would claim that racism was the reason she did not attend.

To survive, she began teaching music to local students, and also began singing in bars, which Eunice’s mother would refer that practice as “working in the fires of hell”. But quickly she attracted club goers up and down the East Coast with her unique jazz-blues renditions of Gershwin, Porter and Rodgers standards. And then Eunice Waymon became Nina Simone, taking the nickname “Nina” meaning “little one” in Spanish and “Simone” after the actress Simone Signoret.

At the age of 24, Nina came to the attention of Syd Nathan, owner of the Ohio-based King Records, and was signed to his Jazz imprint, Bethlehem Records. While at first Nathan had insisted on choosing songs for her debut set, he eventually relented and allowed Nina to delve in the repertoire she had been performing at clubs and was well known for. What I think is one of her most outstanding jazz compositions on Bethlehem is the B sided African Mailman released in 1960, and one you really need to check out!

Nina’s stay with Bethlehem Records was short lived and in 1959, after moving to New York City, she was signed by Joyce Selznik, the eastern talent scout for Colpix Records, a division of Columbia Pictures, founded in 1958. Her stay with Colpix resulted in some incredible recordings, including 9 albums, and some mighty fine 45’s including Forbidden Fruit and her beautiful version of I Got It Bad.

Produced by big band legend Stu Phillips, Come On Back, Jack is Nina’s response to Ray Charles dance floor bomb Hit The Road Jack, (written by rhythm and bluesman Percy Mayfield) which was released that same year! But while it does share a similar riff and beat, I have to say it’s Nina’s jam that has got Jack running the fastest and packs as much, if not more, dance floor impact. Unavailable on LP, this is a prized diamond hidden amongst so many jewels in Nina’s treasure trove that’s worth hunting for!

Finally, this post is only a very small chapter of this remarkable woman’s life and her recording career, but please stay tuned for future Simone posts here, as there’s certainly a few more 45’s that deserve to be spotlighted!

To find out so much more on this incredible woman’s highly influential life and music visit ninasimone.com.
And also….I Put A Spell On You: The Autobiography Of Nina Simone