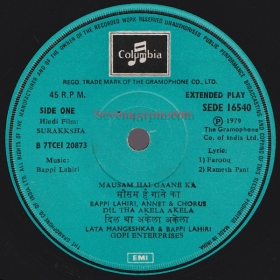 So I just recently returned from a short but incredible trip into country India, which I’m just refusing to let go of at the moment. The experience was one I’ll never forget because of the people I met, the things I saw, and the sounds I heard.

Somehow, in the little city known as Pushkar, a small record shop appeared, something I was not expecting to see, and a lovely man named Shashi, sat behind the counter. Now my knowledge of Indian music is very thin, especially in the Bollywood genre, which is what a lot of the shop stock consisted of. But after a few days of drop-ins, and some great recommendations from the shop keeper, I started to comprehend the realisation that there were certainly some records that needed to come back home with me! While most of my wins were marvelous, colourful outlandish soundtrack LP’s, I did also manage to bring home a few 7″s, including this one by prolific and renowned “disco king” Bappi Lahiri, that I thought I should share.

Bappi Lahiri was born in Calcutta, West Bengal in 1952 into a family with a rich tradition in classical music. His father, Aparesh Lahiri was a famous Bengali singer and his mother, Bansari Lahiri was a musician and a singer who was well-versed in classical music and Shyama Sangeet. His parents were determined to teach their only child in every aspect of music, and by the tender age of three, Bappi began to play the tabla. At the young age of 19, Bappi began his career as a music director, and received his first opportunity in a Bengali film, Daadu in 1972. The first Hindi film he composed music for was Nanha Shikari in 1973, and only 2 years later it was Tahir Husain’s Hindi film, Zakhmee that brought him to the heights of Bollywood fame, also bringing forth a new era in the Hindi film industry. Bappi rose from strength to strength, and the music for his subsequent films Chalte Chalte and Surakksha were tremendously popular, placing Bappi on the pedestal of stardom, and making him the youngest music director of his time to have attained such intense success in such a short duration.

Surakksha, which I think translates as “Protection” in Hindi, was directed by Ravikant Nagaich and released in 1979. The film stars Mithun Chakraborty as CBI Officer Gopi, Ranjeeta Kaur, Jeevan, Jagdeep, Iftekhar, and Aruna Irani. Based as a spy thriller (with the hero’s code of Gunmaster G9, as opposed to 007), it was the first of a two of such films with Chakraborty in the lead, the other being the sequel Wardat. The success of Surakksha made Chakraborty a huge commercial star. 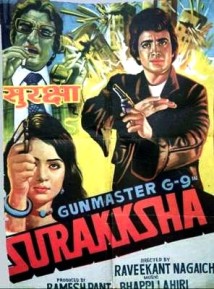 I have yet to watch this film in it’s entirety, so I’m just summarising the plot through other sources here. The evil Shiv Shakti Organization (SSO) intends to spread terror in India. The trouble starts when a plane manned by Captain Kapoor is attacked by a stream of deadly signals forcing the plane to land. The missing agent gets replaced by a look alike, but Officer Gopi, aka Gunmaster G-9, who was assigned by the Central Bureau of Investigation, is on to it!  But there are obstacles, including Priya Varma, played by Ranjeeta Kaur, who’s out to investigate her father’s death, supposedly by Gopi, and who’s determined to seduce and enslave him. Gunmaster G-9 must also battle other women, venomous snakes, gangsters, kidnappers and even a robot-human. The fast adventures continue with wild stunts and car chases, but of course there’s always an opportunity to dance with scantily-clad girls, before there inevitable meeting with the patchy-eyed SSO chief Doctor Shiva .

Actress Prema Narayan who plays Maggie, is quite the attractive star who has quite an established Bollywood movie career, appearing in close to seventy films. Originally an English teacher in a convent school, she later opted for  a modelling career and was crowned Femina Miss India World in 1971. Besides being noticed for her acting prowess she was also appreciated for her western-style dance numbers. A fine example of those said dance moves can be witnessed during the song Tere Jaisa Pyara Koi Nahin in Hotel. She was also a regular feature in lower-grade horror films including Mangalsutra, Saat Saal Baad and Ghabrahat. Mithun Chakraborty made his acting debut with the art house drama Mrigayaa (1976), for which he won his first National Film Award for Best Actor, and to this day has appeared in more than 350 films. Most famous for his lead role as dancer Jimmy in the 1982 super-hit film Disco Dancer, he is particularly recognised as one of the best “dancing-heroes” in Bollywood with his unique “Disco and Desi” fusion-style dancing that is immensely popular among the masses. The 1981 Gunmaster sequel Wardat, was even more high action with giant locust plagues attacks (brought on by evil men who plan to black market farmer’s grains), a new hunch backed super villain called Jambola, more gadgets and even flying cars!

The title track Mausam Hai Gaane KaAlong, includes the popular singer Annette Pinto, who would provide her voice talents on the Gunmaster sequel a few years later as well. Her dynamic voice really delivers a huge cinematic, almost Morricone-like characteristic quality to this opening titles track, and has to be the perfect introduction director Nagaich could have wished for! She went on to release many more sizzlers with other producers also, including Handsome Man from Mr. Bond in 1992 (composer-duo Anand-Milind and brother Anand Chitragupth), the hot disco Love Me Now for Hemant Bhosle and the film Barrister in 1982, and the cheeky Hello Darling with Rajesh Roshan, from the film Telephone in 1985. She also stars on the absolute incredible title track for The Burning Train from composer Rahul Dev Burman, where you feel like she’s channeling Yma Sumac! I will feature that one soon!

Surakksha also marked Bappi Lahiri’s entry as a singer, where he would provide his voice talents onto four of films compositions, including the second track on this EP, Dil Tha Akela Akela, which incredibly sounds like The Stones’ As Tears Go By! In fact throughout his career Lahiri has been accused of plagiarizing music produced by other composers without giving them any credit or royalties. I was actually surprised at first, when listening to a bunch of his records, at just how many covers he did, not realising that they were apparently original compositions. Ironically portions of his song Thoda Resham Lagta Hai were included in the song Addictive by American R&B singer Truth Hurts in 2002. Copyright holders sued Interscope Records and its parent company, Universal Music Group to the tune of more than $500 million. But lets not take any praise away from this talented producer/musican. His interpretation can sometimes be wonderful takes on well worn classics (have a listen to Meri Jaisi Mehbooba from Baadal) that can only make you squeal with delight. 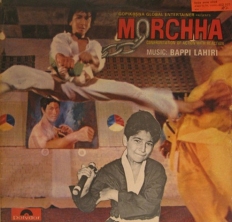 Bappi Lahiri would go on to release literally stacks and stacks of LP’s, and so far my standouts-latest discoveries include Karate, Wanted Dead or Alive, Morchha and Dance Dance…or big sounding soundtracks! Along with Biddu (who had the international breakthrough in 1974 with Kung Fu Fighting with eleven million records sold), Lahiri helped popularise disco music Indian style. The pioneer of disco beats with his refreshing, vibrant, and rhythmic music had the entire nation dancing for decades. He has also worked with renowned singers like Lata Mangeshkar and Asha Bhosle, had paved the path to fame for Alisha Chinai and Usha Uthup through his compositions, and has sung alsongside Mohammed Rafi and Kishore Kumar. In fact a barrage of popular singers have sung songs composed by Bappi Lahiri in a career spanning for 40 years in over 600 films in over 5000 songs. Bappi received an award in 1990 from the then Indian President Giani Zail Singh for the best musical score in the film Thanedaar and was invited by Ex-Prime Minister of India, H.D. Deve Gowda, to compose a song for the World Football Tournament in Calcutta.

Lahiri disappeared from the Indian film industry in the 1990s though he tried a brief comeback in the Prakash Mehra produced Dalal starring Mithun Chakraborty with the song Gutur Gutur which was a big hit although it had its share of controversies due to its suggestive lyrics. Thereafter he focused on bringing out albums with remixes of his earlier songs, and to this day appears on guest spots for popular TV shows, with the occasional film role. Lahiri is famous for his constant desire to reinvent himself and face the challenge to keep up with the rapidly changing preferences of current generations. He is the complete entertainer and superstar with his multiple talents as a singer, music director, and percussionist! I feel I have only scratched the surface of what this man has done for Bollywood music, and the damage to dance floors he is responsible for all around India.