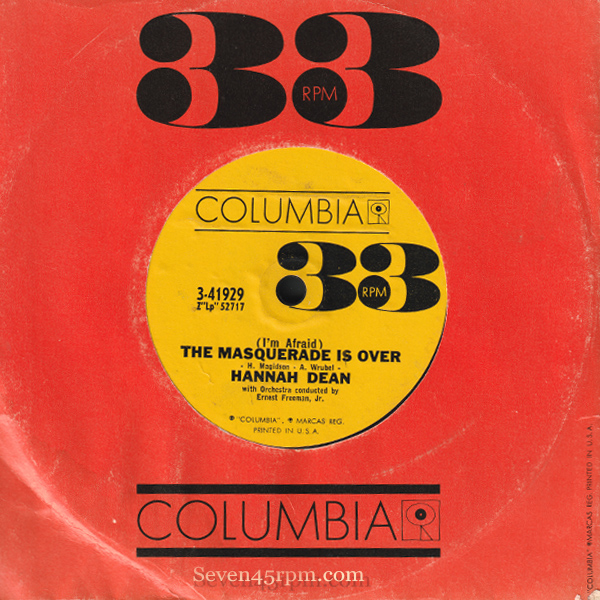 I picked up this haunting love song a few years ago, but since, I haven’t really been able to find a lot about the singer or the release. Well, regardless of my inability, here’s a brief post hoping someone out there can shed some light on this relatively unknown singer.

So what 45Cat and Discogs are telling me, is that she did have 4 single releases from 1960 to 1963, all on Columbia. Her first single was an upbeat blues rocker called, Itty Bitty Love, flipped with the lovely slow and swaying So Little Time. Predominantly released in the US early in 1960, however 45Cat shows an odd distribution here in Australia later that same year, on the CBS Coronet label. It also actually looks like a panel sheet-sleeve came with a promotional record for this release, with a picture of the beautiful Hannah!

A 45Cat member who is fortunate enough to have a copy, also gratefully shares the back cover, and reads this about Dean…“Hannah Dean’s style is a mixture of rhythm and blues and rock n’ roll sung with the feeling and unbuttoned phrasing of a gospel singer”. Irving Townsend, Executive Producer for Columbia Records in Hollywood, sent this personal evaluation of Hannah Dean’s talent to Columbia’s producers in New York along with Hannah’s first record – “So Little Time” backed with “Itty Bitty Love.”

The response was rapid. They agreed down to the last man. Hannah’s unique vocal quality is understandable because she has been a gospel singer since she was two and still sings regularly in a Los Angeles Baptist Church where her mother serves as minister. Until two years ago she was a Los Angeles house wife, completely unaware that she could be an extraordinary popular singer.

She was heard at a church by a Los Angeles talent scout who suggested immediately that Hannah should consider a popular career. Hannah told him frankly that she had no formal training and only sang popular music to herself and a few friends. Nevertheless, she was bolstered by his confidence and agreed to make the demonstration record which soon after brought her a Columbia recording contract. Hannah’s Dean’s first record launches for her a career as promising as it was unanticipated.

I also came across a fellow blogger with similar record collecting habits, and found a link on their The Listening Post blog, that pointed me to this short review from The Billboard dated  September 5, 1960. It reads… HANNAH DEAN is a new name on the scene via the release of her first Columbia Record, ‘So Little Time/Itty Bitty Love’. Until two months ago she was a Los Angeles housewife whose only singing outlet was the L.A Baptist church. She was heard at the church by a talent scout who encouraged her to make a demonstration record that found its way to Columbia Records and resulted in a contract. Irving Townsend, Executive producer for Columbia in Hollywood, describes Miss Dean’s style as a “mixture of rhythm and blues and rock’n’roll sung with the feeling and unbuttoned phrasing of a gospel singer.”

In 1962, Dean released Open Sesame / Without your Love. At this very time, I cannot find even a sound bite of this release. There are a couple of copies on ebay (not big money) but unfortunately not one seller supplies an audio sample. So I’m at a loss to tell you anything about this one.

Dean’s Gospel righteousness roots and vocal capabilities come out for her 1963 release You, You, You. The B side High Noon has everything I love about the beautiful popcorn genre, and now makes me want to get my hands on a copy.

So back to Strange Man. I can’t for the life of me figure out why this release is quite unknown, especially as it sits on one of the bigger labels. The production is absolute killer. It has all the ingredients, the devilish blues guitar work from intro to end, the flute, Dean’s deep soul lines as well as the backing vocals, all sitting in the exact right place. When I hear tracks like this, I am aware this is no lost recording accident. Everyone in that recording studio at that time knew what exactly was being produced. Imagine as a musician, coming home from the studio late at night and realising what you were just a part of. And being in the midst of this truly holy and graceful Hannah Dean! January 16, 1961 Billboard Music Weekly states “Strange Man – On this side the thrush turns in another attractive performance on an unusual piece of bluesy material. Two sides show off her strong pipes”.

On the flip is one of many many covers of (I’m Afraid) The Masquerade Is Over, originally released in January 20, 1939, by Larry Clinton and His Orchestra, with Vocal Refrain by Bea Wain. I might go to hell for saying this, but Dean’s version is smoking hot. There’s something about her commitment that maybe can only come from that very deep part of the soul of a gospel singer. There are some beautiful versions of this song out there, from artists including Stevie Wonder, Marvin Gaye, Nancy Wilson and my personal favourite from Aretha Franklin, and this Dean version sits up high along side these.

So where does this odd 33rpm 7″ release fit in? To be honest, I’m not sure as there’s no catalogue I could find online of this particular release. There is one small hint which is Columbia Marcas Reg. appears on the label, so possibly this is a Spanish release. But Marcas is also Portuguese, and as many Brazilian 7’s come with the 33rpm format, maybe this is it’s origin?

Should we be sad that so many of these unknown songs that surface today, are hidden in the past with no real leads to the artist and their faces? Or should we respect their gospel roots and maybe it was their decision that stardom and popularity wasn’t something as important to them. Tonight, with the lights dimmed down low, I can place the needle down gently, and be grateful that singers like Hannah Dean did gift us with at least a few beautiful songs we can hear and appreciate today. And be thankful, many years ago, these great ladies did have that fleeting time behind that microphone, that is here to stay, and forever.

I hope you can also hear the honest beauty of this track and Hannah Dean. She passed away on May 6, 2004 at the age of 71.

UPDATE! So thanks to my good friend Kristy, who knows how to really dig deep into the hidden corners of the internet, some light has been shed onto Hannah and her career path. It looks like Hannah pursued an acting career in theater and also had a good run in film and TV. Although looks like many TV roles were the type cast “maid” characters and similar.  Thanks to DJ Soup for also recognising her as an actress.

Here’s some, but not all of her screen appearances and plots…

The Black Six Hannah Dean as Mrs. Daniels – 1973 “Six times tougher than Shaft! Six times rougher than Superfly! See the 6 biggest, baddest and best waste 150 motorcycle dudes!” A black high school student is caught dating a white girl by the girl’s brother. He and his white supremacist motorcycle gang beat the boy to death. The boy’s brother an African American veteran of the Vietnam War hears about it and his motorcycle gang, known as the Black Six, vow to avenge his brother’s death.

The World’s Greatest Lover 1977 Hannah Dean as The Maid Directed and written by Gene Wilder Starring Dom DeLuise as Adolph Zitz and  Carol Kane as Annie Hickman. A neurotic baker travels to Hollywood to attend a talent search for an actor to rival the great Valentino. Although not an actor, through blind luck he succeeds, to a certain degree.

Every Girl Should Have One 1978  Hannah Dean as Ernestine. Also starring Zsa Zsa as Olivia Wayne, and Z-man himself, John Lazar as Chris. A million dollar diamond theft involving unlikely thieves, zany lovers and a fast talking maid sets this comedy caper zooming from sophisticated discos to exciting chase scenes all in a spirit of good, innocent fun.Mother, Jugs & Speed  1976 Looks like Hannah may be unaccredited in this American black comedy film? It stars Bill Cosby as Mother, Raquel Welch as Jugs, Harvey Keitel s Tony “Speed” Malatesta, and Larry Hagman as employees of an independent ambulance service trying to survive in Los Angeles. Also stars Toni Basil as the junkie.

Out Of The Blue 1979 12 Episodes Hannah Dean as Gladys (The house keeper) This one was a popular but brief TV show about Random, an angel-in-training who is assigned to live with a suburban Chicago family, while trying to earn his wings by doing good deeds. Hannah had a big part in this series.

This article was found on the Star Tribune (Minneapolis, Minnesota) Sun, Sep 30, 1979.

Hannah Dean was born into music in her Native New Orleans. She was giving concerts in church at the age of 3 and literally sung her way through life. She completed a 6 month run of “The Evolution of the Blues”  on stage just before  the production start of “Out Of The Blue”.

After her sixth child and the Watts Riot inadvertently started her on her acting career. She had decided to cancel all singing dates until after h the birth but worked with young people in Watts teaching choral work. In 1965, following the riot, her Watts Community Youth Choir became affiliated with the Mafundi Institute…a culture center created in the devastated area.  There she won a role in the stage production “Don’t Bother Me, I Can Cope”. This led to other theatrical productions that included Porgy and Bess with Mickey Rooney.

She began recording in the early 50’s with a gospel song “Every Day and Every Hour” with The Branch Gospel Singers. This was followed by “Baby My Love” on an obscure label and then she was signed by Columbia Records where she recorded “So Little Time” Without Your Love” and Itty Bitty Love (backed by The Blossoms). At this time, she meet songwriter Jon Hendrick, who had just written “The Evolution Of The Blues”  Some of the numbers were sung by Mahalia Jackson at the Monterey Jazz Festival. Jackson cancelled her tour and Columbia’s Erwin Townsend Suggested Dean. She received a standing ovation which prompted Columbia to record “Evolution” with Dean singing the gospel songs. Dean went on to sing “Evolution” at the Newport  Jazz Festival, Carnegie Hall and on a Canadian tour.

The Jon Hendricks LP release of Evolution Of The Blues Song from 1960 was released on Columbia and credited with The Hannah Dean & Chorus.  Hendricks is one of the originators of vocalese, which adds lyrics to existing instrumental songs and replaces many instruments with vocalists, and is considered one of the best practitioners of scat singing. A very interesting article discovered here, on the live performance of Evolution Of The Blues, with a brief interview from Hendricks and Dean.

Also found this but not too sure what release it is attached too? “Hannah Dean Explains it All”

Link to Getty image of Hannah Dean publicity portrait for Columbia Records in 1963.