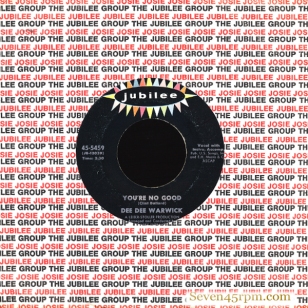 If there’s ever a 7″ that deserves an A for “attitude”, then this is it!

Jersey gal Delia Mae “Dee Dee” Warwick (sister of Dionne Warwick, niece of Cissy Houston and cousin of Whitney Houston) brings us this dizzying monster two-sider from way back in the early 60’s on Jubilee.

A young Dee Dee sang with her sister and their aunt in the New Hope Baptist Church Choir in Newark, New Jersey. Eventually the three women formed the gospel trio the Gospelaires, and at a performance with the Drinkard Singers at the Apollo Theater in 1959, the Warwick sisters were recruited by a record producer for session work and, along with Doris Troy, subsequently became a prolific New York City area session singing team.

Dee Dee began her solo career in 1963 cutting You’re No Good, produced by Jerry Leiber and Mike Stoller, then in ’64 on the Tiger Label, releasing the lovely ballad Don’t Think My Baby’s Coming Back, before signing with Mercury in 65.

Vee-Jay’s head a&r man Calvin Carter found You’re No Good while visiting  New York City in search of material for his label’s roster and he originally intended to cut it with Dee Dee, but as he recalls, “when I went to rehearsal with the tune, it was so negative, I said, ‘Hey, guys don’t talk negative about girls, because girls are the record buyers. No, I better pass on that.’ So I gave the song to Betty Everett”. Still uncertain as to why there’s an exception when Betty sings it however, maybe it was her more “acceptable” feminine approach she gave it?

Dee Dee’s delivery and conviction is nasty on this little gem. The tempo is scathing, the backing vocals are damn sassy! The song hits you in the head like on old piece of hard timber….she’s letting you know! And just as you think you can’t take anymore, you soon discover the rusty nail in the form of some serious fuzz tone delivered by a short but intimidating guitar rant.

While this tune proved to be much more successful for Everett, which she released only 2 months later in November, (the single peaked at number fifty-one on the Hot 100, and at number five on “Cashbox’s R&B Locations” chart), I’m definitely a lot more infatuated with this dirty raw punchier version of Dee Dee’s from what I like to call her “early punk” R&B days. I don’t wish to ever take anything away from Betty’s take, which really is something special (it may start off quite sweet and slick, but it builds up and gets swinging, and she does finally get a bit worked up towards the end).

There’s only one thing better than a two-sider, and as in this case, two tracks that you could say relate to each other in subject (another great example is Ann Sexton’s You’re Losing Me flipped with You’re Gonna Miss Me). The flip Don’t Call Me Any More is simply great and again, hard hitting, and makes this 7″ release quite an interesting one, when in a time most soul songs were about love and sorrow in relationships, and not so much about attitude and angst.

On a sad note…
The more I research about these wonderful artist’s that gave us these incredible songs, too often I find that there’s another darker side to their story. Dee Dee Warwick struggled with narcotics addiction for many years and was in failing health for some time. Her sister was with her when she died on October 18, 2008 in a nursing home in Essex County, New Jersey, aged 66.