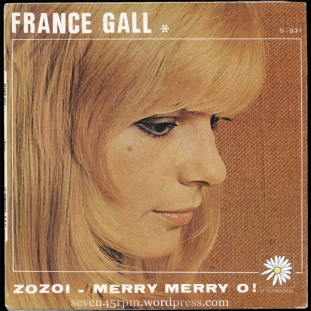 I discovered this french chic many years ago searching through some old records in Paris, during my honeymoon. I couldn’t play my purchases until we returned back home, here in Australia, on the other side of the world, but when I finally did put down the needle to the vinyl, I was hooked on her…and still am to this day! What an amazing talent!

So much can be said about Gall, it’s fair to say the queen of the “ye ye” genre, but she is so much more. Having musical success from the age of 16, then soon collaborating with the legendary genius Serge Gainsbourg, and married to the late and great Michel Berger, this little lady, while quite prolific and mainstream, proved to be quite a power house vocalists, with a versatility that ranged from playful innocent teen pop, to scatty jazz and then more. Way too much to talk about in regards to this amazing woman here, but let’s just say her 60’s career was a bumpy ride. Although winning some worthy successful hits, a few of her recordings were marred with controversy and bad taste (thanks to Mr. Gainsbourg), not helping the young innocent and naive artist, and resulted in poor sales. But having said that, there is no Gall recording I don’t love, and I will have to do a special feature on her and her career some time soon.

So let’s talk ZOZOI! Easily the most sought after 45 of hers and rightly so. Released on La Compaigne, a new label for Gall, this is a contrast to her early sixties sweet pop and “yeye” recordings. Here, she is really turning on the seductive and steamy vocal chords in this latin  bossa bonanza. Penned by her father-lyricist Robert Gall, recorded with the Brazilian master Pianist Cesar Camargo Mariano and his Sambalanço Trio, this is definitely new ground for her and is she just loving it. According to musicaltaste.com,  while the band recorded in Brazil, the vocals were overdubbed later in France. Not an easy one to find in today’s market, but even rarer is the fantastico Italian vocal version, and I mean RARE! Sadly, I don’t have it, but really want it, so if you have a spare copy, I’ll be happy to take it! Released in 1970, it’s a must have! It’s French, it’s Latin, it’s Brazilian, it’s Tropicalia, and with that great horn section and that tempo, it’s as hot as this sweet little lady gets! 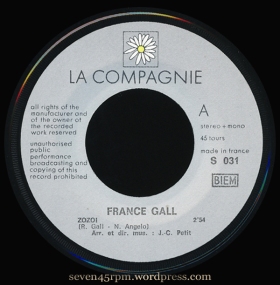 This entry was posted on December 23, 2013 by seven45rpm. It was filed under French, Wild Kittens, Yeye and was tagged with francegall, French, LaCompaigne, LaCompaigneS103, yeye, zozoi.