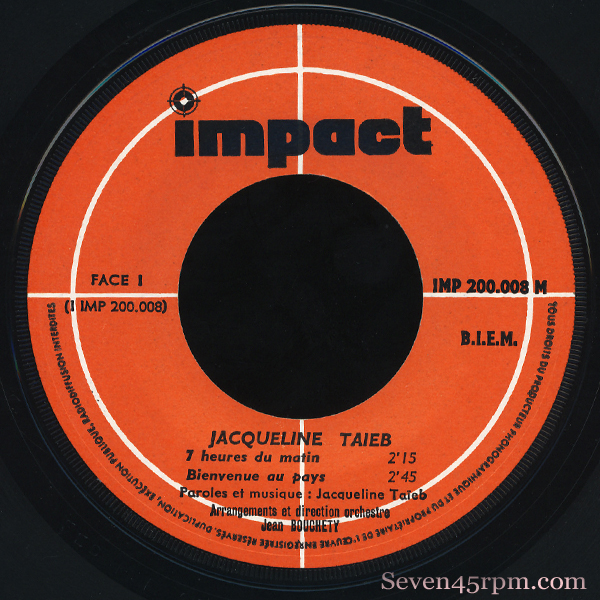 Born 1948 in Carthage, Tunisia, the young Taïeb arrived in France with her parents at age eight. Her father gifted her with a guitar at 12 (like every good dad should do) which she must have really connected with, because soon she would be composing her own songs. It wasn’t long before a talent scout would discover her while singing with friends. It was ’66, and what an exciting time it must have been for the big eyes of 18 year old singer-songwriter, scoring a contract with the record label Impact, and then being quickly whisked away off to London for her first recording sessions.

1967 saw a string of 7″ releases for the then 19 year old Jacqueline, but it’s this debut EP release (in January) that she is most well worshiped for. All four songs on the EP were composed by the young singer herself, which you have to remember for that time, was quite rare, as most female singers were expected to perform songs that had been written for them, or perhaps covers of other popular high selling hits.

Though the lead track, the almighty ye ye classic 7 heures du matin, was only a small hit at the time, it has gone on to become considered a classic of the French girl pop genre. It is the story of a young student waking up too early, at 7am, on a Monday morning, struggling with the thoughts of what the day will throw at her. She fantasizes about her boy crush Paul McCartney, helping her complete her homework, while tormenting on which sweater to wear for the day. Obviously a girl who is after trouble, the rebellious girl even considers playing her Elvis record loudly just to upset the neighbors. I mean really…how cute is that!?

It’s a simple song, but a huge dance floor monster! With it’s Steppin’ Stone garage power chords and it’s rebellious Elvis meets The Who attitude, it’s freakin’ impossible not to adore this one! And obviously very high in demand in the collectors circle. This track really brings back some great memories of the Sounds Of Seduction nights we once were fortunate to encounter here in Sydney in the 90’s, hosted by the great Jay Katz, (a friend who is responsible for introducing me to so much great lost European dance and film music of the sixties). And this song was also the trigger to the beginnings of my Ye ye obsession!

Update! A few years back I managed to get my hands on the elusive Australian issue of this masterpiece, with both 7AM and the flip side, which translates to Tonight I’m Going Home, sung in English! And finally getting a chance to upload. I love both these English renditions, even as a purist to the French originals! This issue has a catalogue date set to 1968. 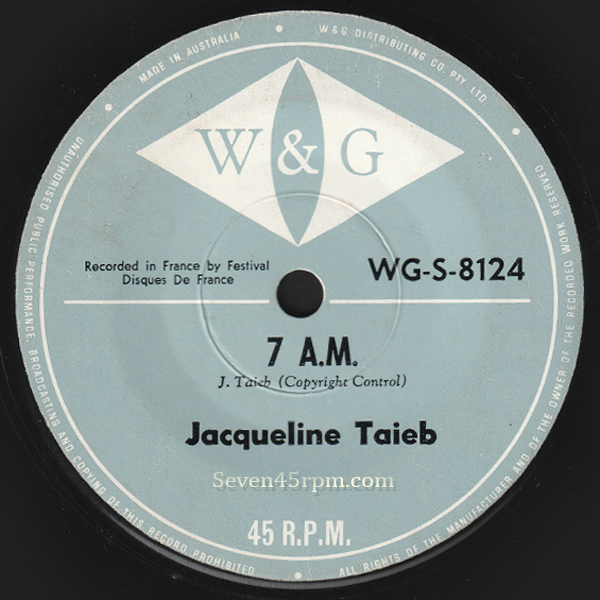 Side B – Tonight I’m Going Home