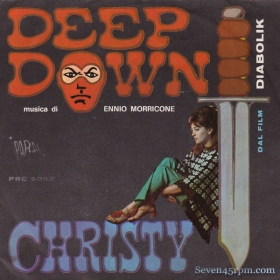 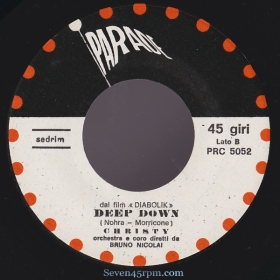 For many years I’ve been a huge fan of those dark Italian cinematic soundtracks from the 60’s and 70’s, but If I had to specify a period in my life where it all started, I have to honestly say it was way back in my childhood. Growing up in the 70’s, occasionally those great spaghetti westerns were screened on the TV, if very late, on a Saturday night. And while I was most of the time permitted to sit alongside and experience these great films with my papa, I somehow doubt I would have lasted the distance at that time of night. However the dramatic opening titles definitely pulled me in, and they stuck and still are quite memorable for me today. The Good, The Bad And The Ugly was one of those films, and it so happened that my papa also owned the picture sleeve 45 (the Hugo Montenegro version) which I would play over and over.

But it wasn’t until many years later, as I was growing up and started to dig deeper into the heart and soul of music, did I start realising the great names and achievements of these composers. Nino Rota, Armando Trovajoli, Piero Umiliani, Piero Piccioni…these and many more were true masters of the genre. But there is no argument that it is Ennio Morricone who is the ruler of the castle, who stands tallest without a doubt, on that high cinematic mountain.

One of Morricone’s strongest elements of his work has to be depth and atmosphere, and in the 60’s, there was a plenty of it. Many of his compositions and film scores were immersed with very deep, haunting and many times sensual flavours. Moody female vocals would be key, and were often used as background instruments rather than lyrically. Now while this Morricone sound is famous today, and those vocals are such an important and recognisable ingredient, it’s still difficult to find out a real lot about these incredible singers, as is the case with Christy (and also Edda Dell’Orso from previous post). Luckily I have a few friends who are big fans (such as Brendan Young aka dj Diabolik) who have been able to give me a few leads to follow. 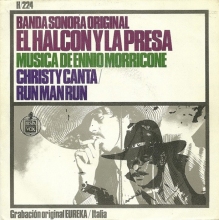 Maria Cristina Brancucci was born in Rome on April 20, 1940. In 1966 Morricone took her into the recording studio to lay down some vocal tracks for Sergio Sollima’s feature La Resa Dei Conti. It was a big spaghetti western that deserved a big opening title track, which she provided so appropriately with Run Man Run. The film falls under the subgenre called Zapata Westerns (spaghetti westerns with some political context usually concerning the Mexican revolution) and was co-written by long time Sergio Leone collaborator Sergio Donati. With Tomás Milián who plays Cuchillo and bounty hunter Jonathan Corbett, who is played by Lee Van Cleef, it is today considered as one of the best Italian Westerns ever made due to its tightly directed staged scenes and genius score. The English release, The Big Gundown, would also provide an alternate English version of “Run”, but I definitely lean more towards the more pure Italian version. 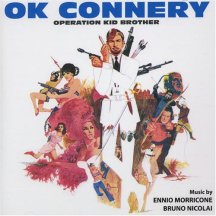 In 1967, Christy calibrated with Morricone for the spy spoof OK Connery (re-titled Operation Kid Brother for the US). The plot involves an evil criminal named Thanato, who is bent on taking over the world, using a magnetic wave generator that will cause all metal-based machinery to grind to a halt. However, the secret agent normally assigned to such tasks isn’t available, so they engage his civilian brother, Neil, who is a world class plastic surgeon, hypnotist, and lip reader, which turn out to be precisely the skills required for thwarting Thanatos. Sean Connery’s brother Neil, actually plays the role of the surgeon, and the film includes a bunch of familiar bond faces including Bernard Lee, the original M from the Bond series, and the original Moneypenny, Lois Maxwell. Former Miss Rome and Miss World 1960 runner up Daniela Bianchi, is also starring in the wild romp and she sizzles just as you would hope and expect from an Italian beauty queen!

In 1968 Christy would be called upon again for another western, Tepepa (also known as Long Live the Revolution and Blood and Guns), this time directed by Giulio Petroni. The film stars Tomas Milian as the Mexican revolutionary leader, Jesus Maria Moran a.k.a. Tepepa, and in opposing roles, Orson Welles as Colonel Cascorro, and John Steiner  as Doctor Henry Price, who saves Tepepa from the firing squad in order to exact personal revenge for the death of his fiancée. Christy provides the fitting dramatic Al Messico Che Vorrei, again with Morricone at the wheel. 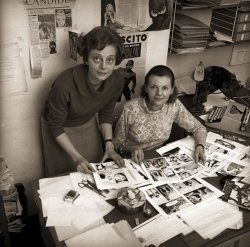 In the late sixties, Christy’s 7″ release Deep Down was recorded for Mario Bava’s diabolical Danger: Diabolik masterpiece. If you happen to be a fan of pop mod spy action films, then this is your movie! It’s bizarre Italian cult cinema at it’s best, and needless to say, it’s legendary with Italian genre film buffs. But even before the 1968 cinematic hero existed, the myth was well and truly alive in the form of a long running controversial pocket sized publication entitled Diabolik. It was created by former secretary, editor and model Angela Giussani, who founded the Astorina publishing house, a company that was limited to board and Western card games. Angela really studied the market and concluded that many commuters liked to read mystery novels. She imagined a magazine commuters could read during their trips, that was entertaining yet intriguing, with breathtaking action. 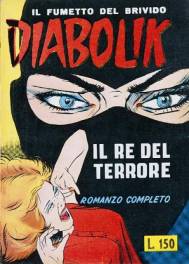 Inspired by Marcel Allain and Pierre Souvestre’s Fantomas, Angela and her younger sister Luciana, who had now started working with her, came up with the handsome masked criminal, who would be seen really as an anti-hero for grown-ups of both sexes. The first issue had a dark yet vibrant cover of a masked man in the background and a woman screaming in the foreground, with the subtitle “Il fumetto del brivido” (The comic book of terror). This really highlighted that the publication was aimed at an audience of grown-ups, who likely preferred noir novels, something rather unique for those times when comics were considered as light entertainment for kids. Luciana collaborated with her on the series’ stories starting from issue #13, and the exciting adventures evolved. Diabolik was soon a successful working man’s super hero which has sold more than 150 million copies since he made his first appearance. 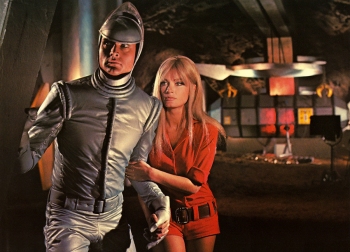 So the plot in a nut shell is. After an armored car leaves the bank with ten-million dollars, Diabolik manages to attack and steal the money, escaping with his partner. He heads back to his secret underground electronic hideout where he decides to steal the famous Aksand emerald necklace for Eva’s birthday from the Saint Just Castle. He out smarts the law, as he has done so many times before, and succeeds, but gangster Ralph Valmont finds a way to kidnap Eva and holds her up for ransom. With the ten million dollars and emerald necklace for trade, Diabolik sets off to the rescue. Eva makes her escape and Diabolik kills Valmont, but this time he is trapped and faces a shiny gold plated death. The police find Diabolik and proclaim him dead, but soon it is revealed that he has in fact faked his death through a technique taught to him by Tibetan lamas. He returns to life, however if he does not get the antidote within 12 hours, he will die. I think I’ll leave it there and keep you all hanging, so you can go out and find a copy to see how it all unfolds for the anti hero. 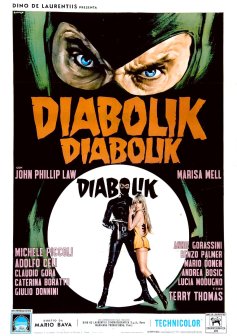 The film is typical of a De Laurentiis production, and while some just can’t see the beauty in this genre, tagging it as camp and cheese, I seriously love this kind of film making. For me everything works as it only could have, in that late sixties era of cinema history. And when the psychedelic spiraling open titles kick in, again we have the great Christy-Morricone collaboration with Deep Down. This time, as opposed to her previous more expressive soundtrack recordings, Christy is far more subtle with her approach. It’s actually very sensual and her vocals riding nicely up alongside the distorted whaling guitar that brands the composition. Don’t get me wrong, she stills sings with her gusto and passion, but this time it’s the whispery voice that really draws you in here. The genius of Morricone shines in this perfect collaboration. Some may find this surprising, but this Parade 1968 single featured, is the only vinyl to be officially released from this infamous underground cult film. The word on the street is that all masters and recordings of Morricone’s work for the film were destroyed in a studio fire. An “unofficial” soundtrack on Sycodelic in 2001 was released but it is believed that these recordings may have been ripped from a laser disc edition of the film, as some sound effects and dialogue are evident throughout. What you will find on this release are 3 alternate versions of Deep Down performed by Edda Dell’Orso (featured on my last post) and the incredible psychedelic Valmont’s Go Go Pad and Underwater Wah-Wa. Crazy fabulous stuff! This featured isolated Diabolik single is flipped with the unconnected Amore Amore Amore, which was produced by Piero Piccioni for Alberto Sordi’s 1967 film Un italiano in America.

Deep Down is such a great little 7″ and a bit of a shining gem in my collection, obviously because it’s an important piece of Diabolik history, but also because I just love this song so, so, so very much. It’s not too difficult to find and it plays nicely for those early cocktail sets. Deep Down was recently covered by Mike Patton on his Mondo Cane Lp, and there’s some great clips online, in particularly the live footage at the Holland Festival in Amsterdam, you may want to search. Whether fans agree if Patton gives the song it’s deserved justice or not, I don’t know, But I have to say, once those horns kick in on that live version, the hairs do rise!

In the late 60s Christy recorded more pop songs (including a great version of Quando Quando Quando) and ended up a popular Italian TV variety artist for a number of years. Today she’s now a well known voice actor, who dubbed Barbara Streisand’s voice for the Italian version of Funny Girl, and has worked on countless animated films including The Princess and the Frog, Anastasia, Bambi, Beauty and the Beast, The Three Musketeers and The Lion King 3.

(1*) The release of Barbarella and Danger: Diabolik lead to a minor trend of adaptations of comic strips that emphasized mild sado-masochism and late 1960s fetish gear. These films were followed up with Piero Vivarelli’s Satanik (1968), Bruno Corbucci’s Isabella, duchessa dei diavoli (1969) and Corrado Farina’s Baba Yaga (1973) which had a Piero Umiliani soundtrack.

Black and white photo. Angela and Luciana Giussani, the creators of the comic book Diabolik, in their studio, 27th September 1966 (photo credit unknown).